I recently began a Master’s degree in Digital Education with University of Edinburgh. The first module is Investigating Digital Environments for Learning, and one of the environments we looked as was Twitter. In a tutorial the course tutor, Prof Hamish McCleod, said that when he first encountered Twitter he just “didn’t get it”. I also felt the same when I first signed up for Twitter (as I’m interested in learning technology, I tend to sign up for lots of new social media applications, many of which get discarded after a while). Objections to Twitter are usually along the lines of “What can you say in 140 characters?” “It’s all about celebrities and what they had for breakfast”; “it’s full of racist trolls”; “it’s a trivial medium – what could it possibly offer me, or teaching and learning?”

The fact is that while you might occasionally encounter such trivia, it’s up to you who you follow, so you don’t have to get that sort of stuff in your timeline. You’ll find that, as Mark Carrigan says “the academic Twittersphere (for lack of a better term) is a relatively self-enclosed ecosystem”.

This is the image problem that Twitter has with a lot of academic staff – they just don’t see the point. I do sense a switch in this attitude though, as more and more academics start to use it, and they see their peers using it, and their students, and their institutions. What they will find, once they dip their toes is that it is an incredibly useful medium for teaching, learning and research.

Crowdsource information, and requests for help with your research:

Some researchers have crowdsourced funding. In addition to information gathering, you can ask for observations, ask for people to do data analysis, transcribe or edit documents.

You can also use Twitter to ask for guest blog posts to build up your network and increase interest in your research.

Publicise your research and publications:

Twitter is also a good way to keep up with news in your field by following prominent figures.

Things you can do include:

A recent discussion on Twitter, using the hashtag ‘#tweetyourthesis‘  proved to be very popular and was subjected to a network analysis. The pictorial representation of that analysis is here (click the image to see a larger version): 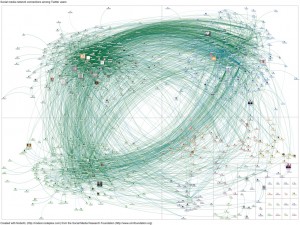 This shows what Twitter is really about – networks and networking. Those thousands of lines represent the interactions between hundreds of different Twitter users. Each of whom is discussing and disseminating information and ideas. When you tweet your research paper, or proposal, or blog post, this is the network it is joining. Whenever anyone asks what use is Twitter – it’s worth remembering this image.