The end of February and beginning of March were hectic!

We had the first Richard III Conference at College Court, which was a resounding success.  Delegates came from all over the world to hear the stories behind the discovery and meet the people involved.  The weekend included a trip to Bosworth Battlefield with a guided tour.  Some of the questions that were asked during the weekend that we didn’t have time to answer will be going up on the conference website soon.  Don’t worry if you missed out, hopefully we will hold another conference next year.

March began with another flurry of activity.  I went to a day hosted by Universities UK to find out more about Universities Week and how other institutions undertake public engagement.  We will be taking part in Universities Week from 9th-15th June, so keep an eye out for information on the events coming up.  During that same week, and on a more personal note, I went to the Visitor Studies Group Conference in London and presented a poster on my recent research into the family experience in museums.

Them we had the Big Bang Fair!  The Big Bang Fair showcases science and engineering for schools and families over four days.  Needless to say it was a tiring week, however the experience was amazing.  Here is the team from the Friday: 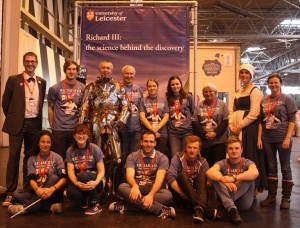 A week later the LUTheatre performed Shakespeare’s Richard III on campus and we held some primary school Richard III themed Archaeology and Genetics sessions.  So it really has been a busy month and a half.  April and May look a little more calm, plenty of time for me to plan some other exciting events and activities.