An Array of Audiences

Posted by Charlotte Barratt in Outreach and Audiences: the discovery of Richard III blog on February 14, 2014

This week has been a little hectic, but has been a demonstration of some of the audiences that we are engaging with on the Richard III Project. Monday began with a visit to Humberstone Primary School, where two Year 5 classes, showed me their work on Richard III.  It was wonderful to see how imaginative […] 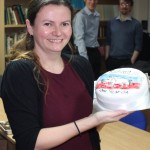