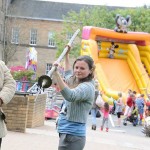 Posted by Charlotte Barratt in Outreach and Audiences: the discovery of Richard III blog on December 20, 2013

Seeing as this is my last working day of 2013 I thought I would do a quick recap of 2013 and a bit of a preview of the events and outreach of 2014. Since the announcement of the identity of the Greyfriar’s Skeleton as Richard III on 4th February 2013 and my appointment in April […]

“Now is the Winter…”

Posted by Charlotte Barratt in Outreach and Audiences: the discovery of Richard III blog on December 9, 2013

As it is getting chillier out there I thought I would post a reminder about the School of English and their “Now is the Winter…” competition. The idea is that you sign up and then submit a new interpretation of the opening soliloquy from Shakespeare’s Richard III.  The competition is open to all Leicestershire secondary […]