Posted by Charlotte Barratt in Outreach and Audiences: the discovery of Richard III blog on November 27, 2013

I had originally planned to try and blog once a week, but then the activities during November got in the way a little. The Scouts heritage badge session went well.  I was a little unprepared for the noise and discussion that the activities created, but it didn’t take me long to realise that the discussion […] 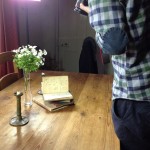 This week has been relatively quiet in relation to other weeks.  This has mainly been down to a lack of meetings, that are useful, but often create more work for me and take up time to do that work.  So I have been able to get on with some of the projects that need some […]