This week has been relatively quiet in relation to other weeks.  This has mainly been down to a lack of meetings, that are useful, but often create more work for me and take up time to do that work.  So I have been able to get on with some of the projects that need some time dedicating to them, such as the Brownie/Guide Challenge Badge that now has a first draft finished.

I did begin my week with the best way to start a Monday morning – photographing a book that has architectural sketches of the Blue Boar Inn made by Henry Goddard.   Well, Carl did the photography, I held it still and the owner’s dog tried to distract us while we did it!  The Goddard Family seems to be incredibly talented when it comes to watercolours, there were a number of amazing pictures of local buildings. 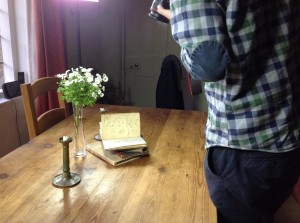 Continuing in the artist vein, I went to a performance of Shakespeare’s Richard III at the Nottingham Playhouse (details for this are on my previous post).   It was a most enjoyable evening out.  I hadn’t seen the play performed before, I had to remember it wasn’t meant to be historically accurate!  Once I had settled into the Tudor propaganda, it was so much easier to see the key messages that Shakespeare was trying to communicate:   Henry Tudor is a hero and make sure the succession is clear and not in the hands of a child (that one is for Elizabeth I)!

There is more information on the ULAS book launch as well,  details are below.  The launch is open to the public so do come along and meet some of the team.
http://www2.le.ac.uk/news/blog/2013/october/richard-iii-the-king-under-the-car-park

I have had some feedback on the schools resources this week, so will be working on them to improve them.   If you have any comments or suggestions on what you would like in schools resources (primary or secondary) please comment, or email me.