It has been quite a year for the team at the University, I thought it would be a nice idea to see how many of the Richard III team and people who have been involved in the project in one place for a small celebration.

I wasn’t working on the project on 4th February 2013, but I was lucky enough to be in the same building as the press conference!  Others who were lucky enough to be involved were bought in to cover it for social media, filming, press releases, herding the world’s press and even ironing the black velvet he was lying on!

So, one year on, we had some cake and 30 minutes away from our desks to commemorate the moment that the news that the Grey Friars skeleton was in fact Richard III.  Not everyone could make it, which is normal as there was still teaching, meetings and research going on, but we got a fair group together. 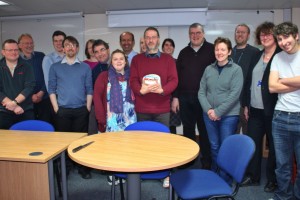 I decorated the cake in the photo (it looks small and there were more cakes to share around). 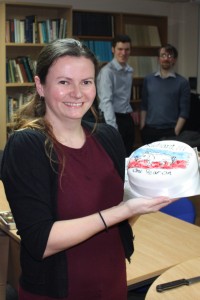 But for now it is time to get my nose back to the grindstone,  the Richard III Conference is only a couple of weeks away.  There are more schools resources, teacher CPD days, meetings with the Council and Cathedral and other exciting projects that need work on them.