‘Sightseeing’ at Holocaust sites in Germany and Austria (Part 2)

As I said in the previous entry, my visit to my first concentration camp had been a somewhat anti-climatic experience for me. Perhaps in part because I had such high expectations about what I would feel on confronting these places I have read so much about over the years. We know so little about people’s expectations and motivations for visiting former concentration camps. We know even less about what they hope to gain from such visits, and perhaps more importantly whether experiences match expectations. Some writers compare the experience to a form of ‘pilgrimage’ and describe how some visitors expect to experience some kind of deep emotional connection or even a ‘spiritual epiphany’ (see for example Keil, 2005). But whether visitors get what they expect from such memorial sites remains to be seen, and may well depend on characteristics of the site itself. Or, in my recent experience, on the types and numbers of other visitors, or even the season and weather conditions in which you visit.

Castle Hartheim I had found to be deeply moving, and I learnt a lot from their tasteful and un-sensationalist exhibition. Having the time and space to wander around and experience the site on our own allowed greater opportunity to reflect on what had happened there. At Dachau the same level of reflection was not so easily achievable, especially as the day wore on and greater numbers of visitors arrived on site. I had even greater expectations for my visit to Mauthausen memorial site. My interest and inspiration for this research came from the documentary ‘KZ’ which was filmed at Mauthausen, and follows visitors around the camp so the audience experiences the history of the camp through the eyes of the tourist. I focused on this documentary, and the emergent growth of interest in ‘dark tourism’, in my public lecture for The Stanley Burton Centre’s Holocaust Awareness Week this March. I had also watched considerable survivor testimony that the director Rex Bloomstein had decided not to include in the final film. 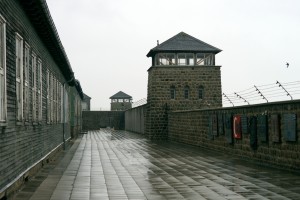 Mauthausen concentration camp was a very brutal camp (even prisoners from Auschwitz I camp feared being transferred there). Estimates suggest up to 100-120,000 people lost their lives there between its construction in 1938 and its liberation in May 1945. I had heard and read a lot about what life was like within this camp, and the varied (and often sadistic) methods of murder there. Again I will talk more about the history of the camp and give more details about my visit there in future blogs. But for me this was a site of special interest, and it did make much more of a psychological and affective impact upon me. There are a number of reasons as to why this may be the case – I felt more personally invested in the place having watched hours and hours of documentary footage. As I wandered around parts of the site I could remember watching specific survivors retell their (often harrowing) accounts of the place whilst revisiting these places again. It was also a more difficult site to get to (with no convenient buses to the site) and a rather grim day to be visiting with gale-force winds and torrential rains throughout the day. The awful weather, location, and the fact that it was a regional Bank Holiday in Austria had the knock-on effect that there were far fewer visitors. You had to be pretty determined to see the site to visit under these conditions and there were none of the family groups taking snapshots that, for me, characterised our visit to Dachau. 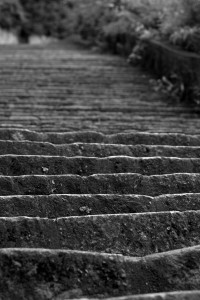 Before the rain began we took the pathway down the ‘Stairs of Death’ to the infamous quarry. We spent an hour or so down there alone, and I was overwhelmed with sadness there. There were numerous occasions at Mauthausen where the enormity of what had happened in this cold fortress-like place really got to me emotionally. With no visitors around there was the time to reflect, and I was less self-conscious of my reactions to the site. The Memorial Park was quite affecting. As the rain began, I wandered around the individual memorials undisturbed by other visitors. A solitary guided tour of schoolchildren bypassed me as I was leaving to enter the main camp. Inside the gates of the camp there were more visitors but there was not the frenzy to take pictures as I had witnessed at Dachau. And certainly no queues waiting to photograph or even touch ‘landmarks’ of the site (the gate, the shower-heads, etc.). It seemed less tourist-dominated, and the visitors seemed much more subdued and respectful of the site. Mauthausen seems a very authentic site – with so much of the original camp remaining intact and far more personal historic relics being incorporated into the exhibitions and installations. I was also very moved by the memorials and in particular the personal messages, photos, flags and wreaths which had been left by people from all over the world who had come to remember a specific family member or a group of individual prisoners who had perished here. 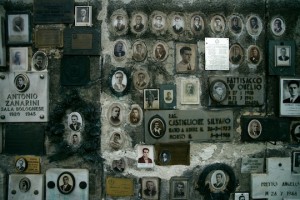 By the end of the day, I felt overwhelmed with emotions at Mauthausen, at times it was a distressing experience. There is such a commitment there (particularly in the new exhibition in the old infirmary) to telling individual stories, and combining the historical relics with video and audio accounts from former prisoners and former residents of the town. Mauthausen really confronts the stark reality of the camp system and the atrocities that took place there. A photographic exhibition in one of the old barracks showed the most upsetting and graphic archive images of the contemporary camp. There were stories and images there that remain imprinted on my mind, and continue to disturb and horrify me.

The final site we visited was more of a ‘hidden’ site. Of the former satellite camps of Gusen I and Gusen II very little of the camps themselves remain, as they were largely destroyed and the land redeveloped into a private residential estate in the 1950s. Although the crematorium remained (and was made into a memorial site in 1960), a Visitor Centre, including its exhibition about the history of the camps, was not opened until 2004. It had taken years of campaigning from both survivors and the local KZ Gusen Memorial Committee, who felt that it was important to remember the brutality and inhuman conditions of these camps, and wanted to make the history of the ‘forgotten’ camps more accessible to the public. In 2007 this was further realised with the creation of  ‘The invisible camp’ Gusen Audiowalk project. Visitors borrow an iPod and headphones, and navigate their way around the former sites of the camps. The walk takes about 100 minutes (over 2 hours if you include the walk back at the end). It starts at the Visitor Centre and goes from the remaining buildings of Gusen I (now residential and mixed in with the other houses), to the adjoining site of Gusen II (also covered with houses), follows the track of the old railway that went into the camps, past the town of St Georgen (the nearest town at the time), and to the site of the old Messerschmitt jet factory tunnels (where many prisoners worked in especially harsh conditions). 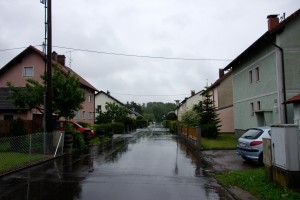 Residential streets on the site of former Gusen KZ
(Photo by Matt Keyworth, 2013)

Again, I will write more about this in future blogs. Overall, it was a very different but effective way to remember what happened here. To appreciate the awful history of the place, beneath the pleasing facade of the pretty residential streets and the day-to-day ordinary lives of the residents. There are no overly graphic or distressing long testimonies here – but short accounts woven together and themed around where you are standing as you follow the instructions about where to go, where to stop, and what to look at. And it’s not just the survivors who are present here in these narratives, but the people who lived in the neighbouring community of St Georgen at the time, the SS guards who worked in the camps, and even the current residents (including how they feel about living on a site that witnessed so much suffering, and how they feel about having ‘tourists’ wander among their houses on the tour). 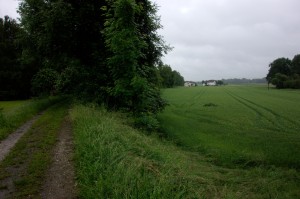 Site of the old railway tracks into Gusen I and II
(Photo by Matt Keyworth, 2013)

The weather by this point was horrendous – I felt that in such weather you had to be either very determined or ‘mad’ to spend over two hours trekking across fields and through the woodland. Unsurprisingly we were the only people we saw taking the ‘Gusen journey’ that day, and there was only one other brief visitor to the Visitor Centre while we were there. By the end of the day we were soaked to the skin, our jeans covered in mud, having battled the winds and rain with our weatherworn umbrellas. We certainly got some strange looks from residents as we wandered along past their homes in the rain with our headphones on. But as a whole, it was a subtle and yet powerful way to empathise with what these sub-camps were like – Gusen II had the highest death rate of all the camps (excluding the extermination camps in Poland) and conditions were notoriously bad there. It made you appreciate the past in the present and in situ. But it was time to return to Munich – and we barely made it out of Austria before the train line was indefinitely closed due to the floods.

Overall the trip (whilst being very wet and exhausting) was rewarding but was emotionally quite demanding (and depressing). This was probably to be expected; after all we were ‘sightseeing in the mansions of the dead’ (as Keil described his article about Auschwitz in 2005). In our 6-day journey from Munich to Upper Austria, and back again, we had visited two major former concentration camps, one of the most active T4 Euthanasia Centres, and trekked across a residential housing estate, woodlands and fields on the the sites of Gusen I and II. So we had been to some of the most depressing sites of suffering and death, and read an enormous amount of factual and biographical information, as well as confronted some of the most distressing and graphic archive photographs. So it was psychologically draining. Thankfully we had a spare few hours in Munich at the end of the trip to do some more standard ‘tourist’ activities such as visiting the Staatliche Antikensammlungen (the State Collections of Antiquities) (which meant a return to Königsplatz), the Neue Pinakothek (‘New’ Art Gallery), and the Brandhorst Museum (of contemporary modern art) before returning home to the thankfully more clement weather in England.