‘Sightseeing’ at Holocaust sites in Germany and Austria (Part 1) 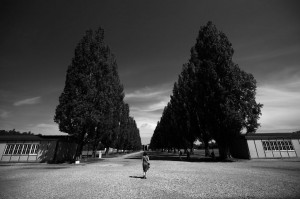 I’m writing this two-part blog in-between my two fieldwork trips to Germany and Austria. Last week I got back from my visit to Munich in Bavaria, and Linz in Upper Austria, where I visited a number of Holocaust-related sites and memorials in the surrounding areas. At the end of this week I embark on the second stage of the trip to Berlin to focus there quite specifically on sites of education and memorialisation. I will write in more depth about each of the sites visited in future blogs, but here are some initial impressions.

I must admit I did feel a bit of a ‘dark tourist’ myself with my packed itinerary of Holocaust- and National Socialism-related sites. I imagine that observers would have thought me one of the more macabre visitors as I spent hours making sure I saw everything, made copious notes, and dragged with me my reluctant photographer to take endless pictures (for use in this blog and in my academic articles to follow). And although I knew that I was there for professional reasons, and was careful to be respectful to the memory of the sites at all times, I did still find it uncomfortable actually being in places where such mass breaches of human rights, suffering and murder took place. I tried at times to ‘stand back’ from the experience and make some objective analysis of aspects of the sites of particular interest in my research. At other times I felt it was important to immerse myself in the location, and try and experience it as every other casual sightseer would experience it. I see this as an attempt at ‘autoethnography’ – to combine analysis of experience with a more personal and reflexive stance to the research. On some occasions my emotions at being at the site of such atrocities did affect me greatly. Although it was very apparent that some sites ‘got to me’ in terms of emotional connection and empathy much more than other sites. And some, often quite small, aspects of the sites and exhibitions did have powerful and moving effects. 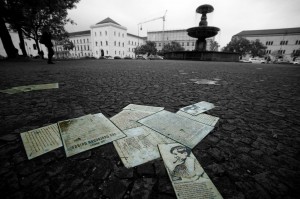 I spent my first afternoon in Munich wandering the rain-soaked streets exploring the places most associated with Munich’s National Socialist past such as Königsplatz (Hitler’s former parade ground), and the planned site of the new Documentation Centre for the History of National Socialism (on the site of the destroyed “Brown House” which served as the Nazi Party Headquarters). Of particular interest was one of the memorials to resistance, as Munich was very much a city that was (forecefully) dominated by the Nazis and featured heavily in their rise to power. The White Rose pavement memorial can be found at the entrance to the main building of Munich’s Ludwig Maximillian University. It memorialises the resistance fighters Hans and Sophie Scholl who were students here during the Nazi regime. On 18 February 1943 they were seen here handing out pamphlets and were denounced to the Gestapo. The memorial features ceramic reproductions of pages from pamphlets and books. They are surprising realistic and looked almost as if a hurrying student had accidentally dropped them on the rain drenched pavements. I’m not sure, however, how many of the current students and local residents think about what it means and memorialises. When we arrived there was a large group of people in running clothes who had assembled outside the building and were standing on the main part of the memorial – their bright clothing and laughter a contrast to the fear and repression that was prominent here during World War II. 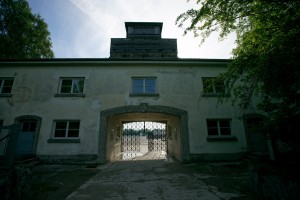 The following day the rain had been replaced with glorious sunshine – albeit a brief respite in a trip marred by torrential rain and floods that left (at the time of writing) 22 flood-related deaths in Germany, Austria, and other parts of Europe. An early train and bus ride took us to Dachau memorial site by 8:30 in the morning for a meeting with a representative from the Education Department there. It is a remarkably easy place to get to from Munich, and buses from the local train station in Dachau take tourists straight to the camp itself. Dachau was often described as a ‘clean’ concentration camp as it was set up as the first and ‘model’ camp in 1933 and featured heavily in Nazi propaganda in the 1930s as an exemplary ‘retraining camp’. This ‘clean’ image was markedly at odds with the camp as it existed for prisoners, and could not be maintained, even for propaganda purposes, during the wartime camp when conditions within became appalling. It was this  ‘clean image’ that came to mind when first entering the vast open expense of the memorial site. The site is so well-maintained that it is almost pristine in its appearance, and the dazzling white buildings really stand out from the enormous expanse of the roll call yard and the site where the barracks stood. Marcuse (2005) discusses how historically the site has been ‘repeatedly sanitised of authentic historical substance” (p. 118), although concerted efforts have been made at the site to dispell this image since the main exhibition was redesigned in 2004. Parts of the site have been ‘stripped’ back to reveal original floors and walls – this is most striking in the prison barracks or ‘bunker’ – and there are some historical relics from the time of the camp now included in the exhibition.

I don’t know whether it was the way the site has been reconstructed and maintained, the crowds of picture-hungry tourists later in the day, or the beauty of the site on such a lovely summer’s day, but emotionally the site initially failed to make an impact on me. I expected that the visit to my ‘first’ former concentration camp, would be deeply upsetting, after all the expectations leading up to this trip. There was, however, this sense of incongruity between the harsh historical reality of what happened there and the tree-lined avenue through the camp, the carefully maintained grounds, the dazzling sunshine and blue sky, and the smiling couple’s and families enjoying another holiday ‘day out’. What does strike you powerfully with Dachau, however, is the sheer scale of the site. 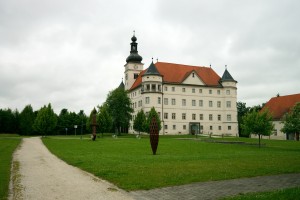 The next day we travelled to Austria and spent the afternoon at Castle Hartheim just outside to small town of Alkoven. During the war Castle Hartheim was one of the Nazi’s ‘T4 Centres’ where from 1940 onwards disabled children and adults were sent as part of the Nazi ‘Euthanasia’ programme. Patients were moved from other institutions, were told that they were being moved to another place of care, and within a few hours of arrival would be recorded, photographed, murdered by carbon monoxide poisoning in the small gas chamber, and cremated. Its use was then expanded to murder concentration camp prisoners deemed ‘unfit to work’. Many prisoners were bought here from Dachau (which never had its own fully operational gas chamber) and its outlying satellite camps, and from the nearby Mauthausen complex of camps (before they constructed their own gas chambers). To me, this was a very moving memorial and education site. We were the only visitors that day, and it felt like a somewhat overlooked place. Nevertheless it is a very important historical site in terms of understanding Dachau and Mauthausen (and their satellite camps), and the origins of the systematic killing of those the Nazi regime decided no longer had any ‘right to life’. We spent hours wandering around the tastefully presented exhibitions, moving memorials, and starkly empty rooms where the patients and prisoners lives were ended. This included the gas chamber, the morgue, the crematorium, and the graves of those remains quite recently discovered on the grounds. Here the murders of the most vulnerable members of society began, providing a ‘template’ of killing that was rolled out to include more and more ‘undesirables’, culminating in The Final Solution and the ‘death camps’ of Poland. I will return to talk about Hartheim in more detail another time. And I will continue my first impressions of Mauthausen memorial site and the former Gusen camps in my next blog…