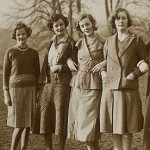 Deborah Mitford, Dowager Duchess of Devonshire, often referred to as the “last Mitford sister”, has passed away. But Debo, as she was known to friends and family, was an institution in her own right. Under her care, Chatsworth House became one of the most profitable stately homes in the country and her work educating children […]