Posted by Julie Coleman in School of English Blog on November 11, 2014

[Posted on behalf of Corinne Fowler] 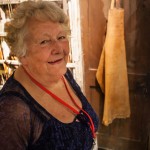 The Centre for New Writing’s Sole2Soul project is based in the School of English and directed by Corinne Fowler. The project is funded by Arts Council England and commissioned by Leicestershire County Council.

The project is designed to increase Harborough Museum’s visitor numbers and to attract more online traffic to the Museum website. It links the traditions of the town’s footwear artisans with modern day tales. 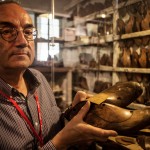 The new digital resources will be launched at Harborough Museum, on Thursday 27 November, between 4pm and 5.30pm at Harborough Museum, in Church Square, Market Harborough. The project team – Corinne Fowler, Ruth Page and Ming Lim – will launch the Falkner app. There will also be live readings of the creative work, podcasts and artefacts on display from the Falkner Boot and Shoe exhibition, named after the family which dominated the hand-made shoe industry in Harborough for three generations.

The launch will bring a key part of the region’s shoemaking history to life through commissioned writing and new digital resources and be the first ever public event in the newly opened Symington building in Market Harborough. 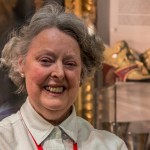 The project initiated an intergenerational dialogue between people aged over 55 and 16-25 year-olds, two groups who are the least likely to come to the Falkner exhibit. All of the work created during the project is featured on the Falkner app, on postcards and in an e-anthology.

Dumped off the bed, me, his calf skin derby, then stabbed by her falling stiletto-DISRESPECT.

As if pulled by linen thread he was drawn

to the shop, past traders’ shouts and bleating sheep.

Leather wrapped itself around him,

each breath a blend of comfort and nostalgia.

He ran his hand along the rack of lasts,

calf or kid, checking for signs of warble fly;

laying it out on the willow cutting board.

By instinct he inspected the uppers

of a pair of newly-finished shoes – the smell,

their feel. He longed to step through the open door

into the yard, move among the bales of horsehide.

Instead he tucked the shoes under his coat

and strode towards The Swan.

The project is funded by Arts Council England and managed by Leicestershire County Council. You can find out more at www.connect-curate.com