Posted by Julie Coleman in School of English Blog on May 2, 2014

My first year as a research student has been full of ups and downs. Mainly I have been overwhelmed with the amount of information I feel that I should know. This is coupled with fleeting moments of Alan Partridge-esque “aha!” experiences when I come across a lucrative discovery. For my thesis, I am using my skills gained on the MA in Victorian Studies at Leicester and am examining how the works of Charles Dickens have affected other later Southern American writers in the twentieth century. I began my work last fall by researching William Faulkner, and I am now beginning to make strides into Flannery O’Connor research. Therefore, I decided over the Easter break to make a trip to Georgia, USA to visit the Flannery O’Connor archives held at Georgia College and State University in Milledgeville. GC&SU holds most of O’Connor’s personal library, letters and recordings of public appearances, and after making contact with their librarians, I knew that visiting there would provide me with a unique experience to get a first-hand look at these texts. While research this year has already proven that both Faulkner and O’Connor were aware of Dickens’ writings (as most twentieth century authors would have been), I had yet to find conclusive evidence that either had written about Dickens, owned any of his books or even merely been “fans.” Therefore, the main aim of my trip was to pursue any evidence of this. 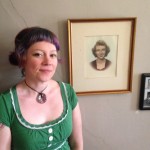 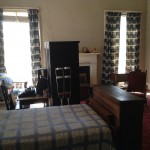 My time spent in Milledgeville, funded by the College of Arts, Humanities and Law Postgraduate Research Fund, was a wonderful experience, like stepping back in time. It is a small town with only about three blocks to call its “downtown.” GC&SU’s librarians were exceedingly well versed in O’Connor’s texts and knew exactly how to help guide my research. I sifted through her personal library and found several copies of Dickens’ works, as well as a literary criticism text on early Victorian novelists from her time at graduate school in Iowa. In Early Victorian Novelists: Essays in Revaluation (1948), O’Connor underlined this sentence regarding the work of Dickens: “It does not matter that Dickens’ world is not lifelike: it is alive” (33). Having noted this particular sentence in what was more than likely a creative writing workshop, I feel it makes a clear statement that O’Connor was studying Dickensian characters and using his works to improve upon her own understanding of writing while at graduate school. Finally, I made time to visit Andalusia, O’Connor’s last home in Milledgeville which is now a house museum. It is preserved as a time capsule memorial to O’Connor, where a cupboard door opens and you inadvertently spy her used up jars of Kraft Mayonnaise and Maxwell House coffee. Andalusia was an amazing sensory experience which brought me closer to understanding O’Connor, not just as a writer struggling to find and explain her own place as a “Southern female author,” but as a person. My time spent in Milledgeville will be immeasurably helpful during my probationary review next month, as it will demonstrate the thread of connection between Dickens and O’Connor, and while the bulk of my O’Connor research is work yet to be done, this new information does show that I am on the right track with my thesis. O’Connor, like Dickens, was working with a very profound sense of place in all of her texts; being able to be physically present in that particular place afforded me a greater sense of understanding about who she was as a person, just as my being present in Bloomsbury grants me a greater understanding of Dickens as a man on some immeasurable level. While many great observations have come from ignoring the author’s biography and sticking to close textual analyses of his/her works, pilgrimages to the hometowns of these writers, who were heavily steeped in their sense of place, does provide us with an interesting lens through which to view our subjects of study.  Kathleen’s PhD is being supervised by Sarah Graham and Holly Furneaux.