The Maid of Orleans and Crusading

Posted by Norman Housley in Cross and the Crescent: Crusading and the Contemporary World Blog on October 27, 2015

The Maid of Orleans and Crusading:   reflections on a colloquium 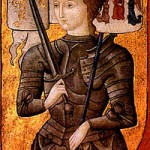 Meeting in the splendid surroundings of the Salle des États in Rouen’s recently opened ‘Historial Jeanne d’Arc’, the speakers at this colloquium gave their attention to a neglected topic in the vast historiography of France’s national saint and heroine. Intentionally or no, the colloquium’s title echoed the one which Joseph Delaville le Roulx gave more than a century ago to his pioneering study of Marshal Boucicaut, La France en Orient au quatorzième siècle. The slight difference in the title helps to explain the neglect of Joan’s period. In the fourteenth century the French presence in the eastern Mediterranean was substantial, and at Rhodes, Izmir, Constantinople and above all Nicopolis (1396), France remained Catholic Europe’s premier crusading nation. By Joan’s lifetime defeat, civil war and occupation had eroded the ability of the French to make even a minimal contribution either to the ongoing vision of recovering Jerusalem or to the rapidly growing need to hold back the Ottoman advance (Antoche).  Hence ‘et l’Orient’, rather than ‘en Orient’.

But as the nine papers presented in the Salle des États showed, even in this time of crisis and despair France’s crusading legacy shaped thought and behaviour, including those of Philip the Good of Burgundy and the members of French chivalric orders (Paviot, Blaise-Groult). Joan of Arc was not immune to the allure of crusade. While overt references to crusading are few in the surviving Johannine sources, they are striking and above all diverse. In fact Joan’s world view incorporated crusade in three separate and distinctive guises. In the first place, Joan subscribed to the archetypal crusading programme of peace in Christendom being consolidated by, and generating, a grand crusade. The most distinctive proponent of this programme in recent times had been Philippe de Mézières and Joan can clearly be seen picking up the chief themes in Mézières’s sprawling corpus of writings, though it remains debatable how and why she did this (Housley, Hélary). In the second place, in a problematic letter whose authenticity Olivier Marin vigorously defended, Joan threatened to come in person to the Czech lands to suppress the Hussite heretics, who had crushed a whole series of crusades directed against them (Marin, Krumeich).

Thirdly, and most contentiously, Joan asserted that the task of expelling the English invaders was itself a form of crusade, because the kingdom of France was sacred space. In terms of her historical impact, of course, this was much more significant than dreams of crusading against Muslims or heretics, because it formed part of Joan’s indubitable contribution towards the revival of Charles VII’s military fortunes. Dan Ioan Muresan, co-organiser of the colloquium with Alexis Grélois, explored anew the ingredients and antecedents of this ideology, while Grélois brought the colloquium’s scholarly proceedings to a close by contextualising Joan in the historiography of women taking up arms, both in the crusades and in the Hundred Years War.

It was impossible not to be moved by discussing these issues in the very building – the Salle des Etats remains part of the archiepiscopal palace – where Joan was sentenced after her capture (1431), and later rehabilitated (1456). A tour of the Historial following the colloquium impressed us all with its success in making the saga of Joan accessible with no cost to historical accuracy and rigour. The authorities at Rouen have achieved something quite remarkable at the Historial, placing this evocative building alongside the site of her burning in the Vieux Marché and her chapel in the cathedral as focal points for Joan’s memorialisation in Rouen.

For me, the saint’s contemporary resonance was brought home with particular force by attending the service of praise (panégyrique) held in Joan’s honour in the cathedral the day after the colloquium: the anniversary of her death 584 years ago.

Posted in Crusades, Joan of Arc | Leave a response