Posted by Norman Housley in Cross and the Crescent: Crusading and the Contemporary World Blog on May 6, 2015

In my essay ‘Giovanni da Capistrano and the crusade of 1456’, published in 2004 in Crusading in the Fifteenth Century, ed. Norman Housley, I briefly (pp. 112-13) made reference to a fresco in the Church of the Immaculate Conception in Olomouc. The church, which in the late fifteenth century was serviced by the Observant branch of the Franciscan Order, was consecrated in 1468 in the presence of King Matthias Corvinus, who was in Moravia to enforce his claim to the Bohemian crown lands against George Podĕbrad, the ‘Hussite king’ of Bohemia. Matthias’s claim was backed by Pope Paul II who had recently proclaimed a crusade against King George. 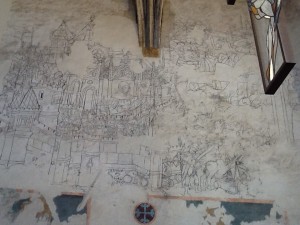 The fresco is in the church’s choir and it shows, in a surging narrative flowing from left to right, the climax of the siege of Belgrade. Under the inspiring gaze of a larger than life Capistrano, the crusaders are storming from the city’s walls into the camp of the defeated and fleeing Turks. Sultan Mehmed II and his troops, victorious at Constantinople in 1453, are crushed three years later. The massive Ottoman cannon are conspicuously powerless in the face of crusading devotion. Standing on the battlements of the city and clutching a banner signed with the cross is (almost certainly) John Hunyadi, the great Hungarian war captain, and father of King Matthias. The fresco is the earliest representation of the Christian victory at Belgrade and its commissioning remains tantalisingly obscure: the Pope, the king and the Franciscans are all possible candidates. What is clear is its message, which in the circumstances of 1468 can hardly be doubted. As Stanko Andrić put it, ‘the besieged and ardently defended town was a metaphor of the country occupied by the Hussites. Capistran, tirelessly preaching the word of God, showed the way to victory.’ Olomouc was to be the new Belgrade.
Though enigmatic in its origins, the fresco bursts with vitality, and it encapsulates a cluster of the key themes of crusading in the 1400s. I used it for the dust jacket of Crusading in the Fifteenth Century but never expected to see it in situ. So I was delighted to receive an invitation from Antonin Kalouc (Palacký University, Olomouc) to come to this beautiful Moravian city, give some lectures on the crusades, and take his students to inspect the fresco. In the afternoon of 27 April, immediately following my lecture on the subject, we walked the short distance to the church and spent time admiring the skill of its anonymous painter and trying to work out obscure details. The latter are particularly challenging on the right hand side of the fresco, where details of the mêlée between Christians and Turks have been lost. This is all the more regrettable because any depiction of the Ottoman army in the mid-fifteenth century is useful for establishing the emerging ‘image of the Turk’. 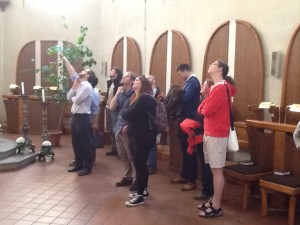 Olomouc has much to offer the visitor and the Czechs are charming hosts: I am grateful to Antonin, Martin Elbel and Jan Stejskal for their hospitality and kindness. 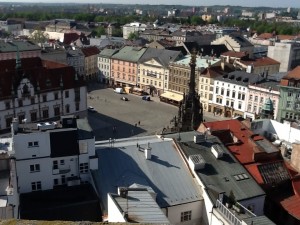 Finally, it is somewhat ironic that a church which commemorates one of the greatest achievements of the medieval Franciscans is today in the hands of their ancient rivals the Dominicans.