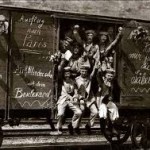 1414 and 1914:  the origins of ‘Prussianism’ Recent days have witnessed a heated debate between Michael Gove, the combative Secretary of State for Education, and Tristram Hunt, Gove’s shadow on the Labour benches, about the most appropriate way to commemorate the First World War. Reacting strongly against what he sees as  a left-wing tendency to […]