Posted by Norman Housley in Cross and the Crescent: Crusading and the Contemporary World Blog on February 5, 2015

One of the joys of the BBC’S outstanding dramatization of ‘Wolf Hall’ is its historical accuracy. While each programme is being broadcast, Tudor historians ecstatically tweet away pointing out how much the series is getting right – though there are minor slips like showing wisteria, which apparently was not grown in England until the 1800s.

But accuracy goes far beyond doffing caps and headbands. It also extends to attitudes and diction. I work on European responses to the Ottoman Turks, and was delighted when in episode three Thomas More related the rise of Protestantism to the Turkish conquest of the western Balkans and the recent siege of Vienna (we are in 1531). Men like Luther and Tyndale, he says, are preparing the way for the Turks by undermining Christian unity and solidarity from within. They are agents of the devil and pimps for the sultan. 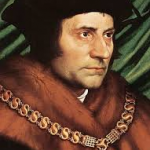 This is spot on. Contemporaries got used to seeing the ‘Turks’ not just as a relentless and brutal Islamic threat to their faith, homes and families, but as a metaphor for the disastrous impact of heresy and schism.

And More was a staunch advocate of Catholic unity, a point referenced in an earlier episode when he is shown dining with the ambassador in England for the Holy Roman Emperor, Charles V. The metaphor of ‘turkishness’ could be taken further. After his imprisonment in the Tower of London in 1534 More wrote a lengthy work entitled ‘The Dialogue of Comfort against Tribulation’. It was a conversation between two fictional Hungarians about how to survive under Turkish rule, and More explored the theme of the appropriate Christian response to occupation and tyranny. When he wrote ‘The Dialogue’, discussing the right way to react to tyranny had of course become a highly personal matter. ‘For there is no born Turk so cruel to Christian folk, as is the false Christian that falleth from the faith.’

One can take issue with the way ‘Wolf Hall’ depicts Thomas More, but irrespective of how his personality and world view are coming across, the production team are certainly right about his politics. He was one of the last Englishmen to argue for a crusade, or as he put it ‘a common power in defence of Christendom against our common enemy the Turk’.