Ottoman Defeat in the Eastern Balkans:  the Battle of Vaslui, 1475.

We approach the 540th anniversary of the Turkish defeat at Vaslui, which occurred on 10 January 1475.  Compared with the sealing of Magna Carta (1215), or with Agincourt and the burning of Jan Hus at Constance (both 1415), Vaslui is likely to attract scant attention in the media.  But for the work of the Leicester Leverhulme Crusades network, the encounter is worth remembering.

Vaslui lies in present-day Romania, and in 1475 it formed part of the Danubian principality of Moldavia. The country was governed by Prince Stephen III (r. 1457-1504), its most remarkable medieval ruler. Stephen was trying to maintain Moldavia’s independence in the face of powerful and ambitious neighbours, Sultan Mehmed II to the south, King Matthias Corvinus of Hungary to the west, and King Jan I Olbracht of Poland to the north. To that end Stephen had followed the practice of entering into alliance with whomever he judged the most useful to him, without paying too much regard to religious affiliations. His allies included far-flung rulers like Pope Sixtus IV in Rome and Uzun Hasan, the ruler of the Aq Qoyunlu Turkomans, in Iran and Iraq. But in 1475 the religious alignment was relatively clear-cut. Stephen decided to make use of Ottoman difficulties in the east to stop making tribute payments to Istanbul, and he was operating within a crusading framework – Venice, desperate for allies against the sultan, offered him valuable advice and information. Drawing on his superior knowledge of the terrain at Vaslui, Stephen inflicted a crushing defeat on the invading Turkish army under Hadim Suleiman Pasha, the governor of the Ottoman European provinces. There is a very full entry on the battle in Wikipedia including some excellent contemporary illustrations.

So why does Vaslui matter?  In the first place, in the whole of Mehmed II’s long reign (1451-81) it ranked among the worst defeats that the sultan suffered at Christian hands. In fact the only more serious setback was the sultan’s personal humiliation at Belgrade in 1456. Coming so soon after Mehmed’s capture of the Venetian naval fortress of Negroponte in 1470 – a demoralizing event not least because it clearly showed Ottoman maritime capability – Vaslui raised hopes in much the same way that Belgrade had done two decades earlier. In the second place, the victorious Moldavians were Orthodox Christians, and this made their success particularly pleasing to Pope Sixtus IV. His policy of encouraging Moldavia to resist the Ottomans appeared to be paying off and Stephen was adroitly holding out the hope that his subjects might enter into full communion with Rome. Church Union coupled with crusade had been the dream of popes for decades, not least because it helped stave off demands for thoroughgoing reform of the Church in the west.

The battle was not a turning point, any more than Agincourt had proved to be. Five years later the Turks were landing troops at Otranto in southern Italy (see my earlier posting). Ottoman encroachments into Moldavia continued and the clarity of 1475’s religious alignment quickly became muddied. But for a brief spell Vaslui seemed to offer light in the darkness. 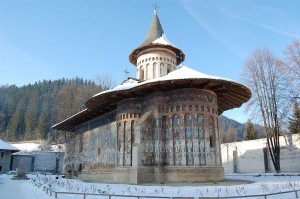 And its legacy remains imposing, for Voroneţ monastery, which Stephen III founded nearby to commemorate his triumph, remains a UNESCO World Heritage Site, a masterpiece of late medieval Moldavia’s dynamic and colourful art.