Posted by Norman Housley in Cross and the Crescent: Crusading and the Contemporary World Blog on April 29, 2014

For anyone familiar with the history of the fifteenth century, Sunday’s (27th April 2014) canonization of Angelo Giuseppe Roncalli, or John XXIII, was somewhat surreal. For he was not the first pope to bear that name and number.

Between 1410 and 1415 another Italian, Baldassare Cossa, was elected Pope as John XXIII, commanding the allegiance of many Catholics as the successor to St Peter and Vicar of Christ. And it’s hard to imagine a greater contrast than that between the new saint and his medieval predecessor. 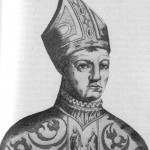 Why was Roncalli not John XXIV?

The answer is that Cossa was elected Pope during the Great Schism and was recognised as such only by members of his obedience. The circumstances were farcical. In 1409 a group of cardinals from the contending Roman and Avignonese obediences, including Cossa, got together at Pisa to elect a Pope who would be universally accepted, and so end the crisis in the Church. But all they managed to do was to create a third obedience and it was this one which Cossa led after his election. Other Catholics regarded him as an Antipope and when the Schism was finally brought to an end at the Council of Constance in 1417, Popes elected during its course were regarded as uncanonical, hence the name and number could be reused.

John left a terrible reputation, which was one reason why over half a millennium went by before the name was adopted again. He owed his election to Medici gold. His court was astonishingly corrupt and the Pope was libidinous and brutal. Even today the list of charges directed against him at Constance holds the power to shock.

Did anything good come out of his legacy? Posthumously, yes, for his tomb in Florence’s baptistery is one of the city’s greatest treasures. But there is little to celebrate in his life and deeds. He did lend his weight to the Council of Constance, but this was only under pressure, when he saw that his chances of success as Pope had drained away and he was looking for an amnesty for his crimes. When the conciliar fathers turned against him he fled from Constance incognito. The cart in which he was hiding turned over and the Pope tumbled out. It was a fitting finale to an inglorious reign. This incident is nicely portrayed in one of the splendid woodcuts illustrating Ulrich von Richental’s history of the council. 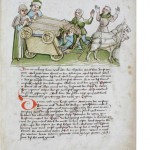 The Pope tumbles from a cart

Those were amongst the grimmest days in the history of the Catholic Church and it’s refreshing to turn from them to the life and merits of the ‘other’ John XXIII.  A great reformer and genuine man of the people, Roncalli’s popularity is attested by the million or so pilgrims who went to Rome for the canonization. His merits included a sprightly sense of humour: when asked how many people worked in the Vatican, he apparently replied ‘about half of them’.