The Council of Constance (1414-18) is famous for bringing the Great Schism to an end and for burning the Czech reformer Jan Hus, precipitating the series of Hussite crusades (1420-31). But the council also called for the reform of Catholic Europe’s plethora of religious orders, and in the years after it ended, the demand for reform started moving downwards from archbishops, through bishops, to individual monasteries. Andrew of Regensburg, a well-informed and gossipy Augustinian canon, tells us what this meant in the Bavarian diocese of Regensburg. In the case of one Benedictine house, probably Prüfening Abbey, it led to tragedy.

Andrew describes the monks of this ancient foundation assembled in their church’s choir under the commanding gaze of Bishop Albert of Regensburg, and being told that their observation of the vows they had taken must improve. ‘I can assure you’, Albert had written to their superior, ‘that on all these matters, if the situation and the resistance of the rebellious demand it, you will receive my robust help and advice and I shall not let you down.’ So there could be no avoiding a stricter regime.

For a monk and priest called Heinrich Wiser, it all proved too much. ‘Driven by his passionate nature’, Wiser refused to change his ways and listed all that he had done for the abbey. His fellow monks sat paralysed, not knowing how to respond to the embarrassing display. Wiser grabbed a younger monk who was his student. He dragged him up the scaffold which surrounded the choir and the two plummeted to the ground. The younger monk survived. Wiser was dead.

Andrew stressed that the deceased, whom he knew well, was industrious, devout and praiseworthy. In particular, nobody was Wiser’s equal in calligraphy, that crucial monastic skill. But it was not enough. In some aspect or aspects of his vocation he was evidently failing, and he could not take the call to improve. So he killed himself.

We recognise the syndrome. The ambitious highflyers and the cunning workshy manage to look after themselves; it’s the hardworking and talented, but self-critical, who sometimes find the spotlight too much. 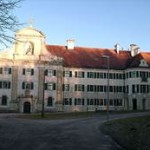