Posted by University of Leicester in Waugh and Words on May 2, 2019 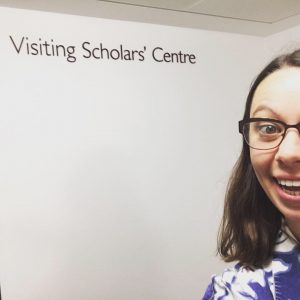 Sophie is based at the Visiting Scholars’ Centre, Weston Library, Oxford

Sophie Swithinbank reflects on the paradox of traditional and millennial values that exist in Oxford, in 2019, and her first week in Oxford, as part – time David Bradshaw Creative Writer in Residence, 2019.

Hello! This is my first (ever) blog so I cannot tell you whether it will be worth your while to read on, right to the end, but just know that if you do not, you will miss out on some very important information about a fast food place on Walton Street.

Having spent the past week immersing myself in Oxford, people-watching, eavesdropping, observing and understanding, it strikes me that this city is caught somewhere between being strikingly old and boldly millennial. Do not mistake this for a negative observation; time carries with it and embraces tradition. Having looked around the city a bit, I have decided, in line the sentiment of Gustav Mahler, that my project will focus on fanning the flames of tradition, rather than blindly worshipping the ashes. I will keep that fire burning, but I will also kindle fires anew.

My premise is fairly simple. I plan to write a short play (working title Arcadia), that is based on the story of Brideshead Revisited, but is set in present day Oxford (much like how Pride and Prejudice joyously became Bridget Jones’ Diary, which went down pretty well, internationally). The pillar of this new piece of work, is that the central friendship will be between two young women, rather than two young men.

My reasons for doing this are two-fold. Firstly, Oxford is a city in which women have historically been  overlooked. The dominating institution of the city – The University of Oxford – has existed in some form since 1096, but did not allow female students to matriculate until 1920. The presence of the University constructed the notion that women do not have a natural place in Oxford; that woman are something fun to get involved with during the weekends and the holidays. The first words uttered by Sebastian Flyte in Brideshead Revisited attest to this: ‘I must say that Oxford has become most peculiar suddenly. Last night it was pullulating with women’[1]. Translating this story to 2019 means embracing the fact that Oxford now pullulates with deserving, respected and strong women, both within and beyond the University. Over the sunny bank-holiday weekend, I saw a millennial Oxford pullulating on Port Meadow with picnics, Kendrick, t-shirts worn over only one shoulder, marijuana cigarettes, bikes, top knots, dreadlocks, bikinis, beers, speakers, trainers, iPhones and half-cooked chicken on tin foil barbeques. The world in Arcadia, will embrace this sunny, and slightly doomed millennial Oxford.

The story at the centre of Brideshead Revisited is a potently timeless one of love, friendship, power and addiction, but the characters at the centre of the story are not timeless. Grown men with teddy-bears and servants, champagne and strawberries no longer exist here (apart from the odd few). I plan to prove that the modern women of Oxford can take up as much space as their male predecessors, Captain Charles Ryder and Lord Sebastian Flyte.

Charley is alone in Oxford. She gets a job. Sab is surrounded by money and friends and parties. She does not need a job. They meet by chance one afternoon on Port Meadow. They form an unexpected, intense and, at times, exhaustingly close friendship, that means everything to both of them. As the dry summer cracks onwards towards September, it becomes clear that Sab isn’t the happy, healthy, wealthy girl she seemed to be, but is grappling with some dark and toxic secrets. Charley makes it her mission to save Sab from these dark places, putting her own life and happiness in jeopardy.

As Sab’s outbursts wear Charley down, and the friendship becomes ever darker and saturated with addiction, Charley starts to wonder how she will ever break free of this intoxicating friendship. 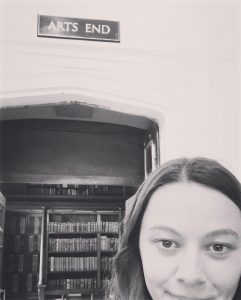 So. There lies my proposal to you. Take it or leave it.

Here are two things of note that have happened in Oxford so far, that may or may not be of interest, and may or may not stitch their way into Arcadia:

I went on an Oxford Ghost Walk. NB. This is not something I would normally do. I was coerced into by my friend, and fellow writer in residence, Rob. We arrived at the meeting place. There were 4 of us, (myself and Rob, and a couple from Brooklyn) guided by a man dressed up as a vampire. He told us stories about gargoyles, dead prostitutes, hangings, battles, and ‘flickering lights’. I got very cold and he said that was because of the ghosts following us about. All the while, the man from Brooklyn trailed behind the group, picking up stones and cigarette butts and putting them in his bum bag. I went home and had a bath, thinking about the bum bag, full of stones, and how heavy it must get by the end of each day.

I went to get a burger from my favorite place – Pepper’s Burgers on Walton Street. It’s a fast food burger place but it took a long time because there were a group of stoned teenage boys in front of me in the queue who clearly had never seen the menu before. One of them claimed he wanted ‘all the sauces’. It is ridiculous to request all the sauces. There are about 10 sauces, ranging from chipotle to honey-mustard, from BBQ, to aioli. His burger came and I looked on in interest as he unwrapped it. It was all sauce.

A kerfuffle behind the counter stole my attention from the saucy boy. The burger woman (dyed black hair, numerous piercings) had spilled water on the grill. The hot oil went up in flames. No one panicked. It would die down. But these were not flames anymore. This was a fire. Five foot flames were licking up the walls. The place was filling with smoke. It took me a while. My head was saying ‘the burger place is on fire’, ‘we need to either put the fire out or leave the burger place’. But everyone was just staring into the flames, stoned, mesmorised.

Eventually a fire extinguisher was located. The fire was put out. All the teenagers were still in there, breathing in the smoke, laughing, waiting for their burgers. Mine arrived first, but I wasn’t hungry anymore.

Do check back in here to keep up with myself and Rob’s writing journeys’ in Oxford. Check out our Twitter: @BradshawResdncy and Instagram: @davidbradshaw_writingresidency.

[2] This is how Sebastian signs off his letters to Charles, in Brideshead Revisited. And here I am, fanning the flames. 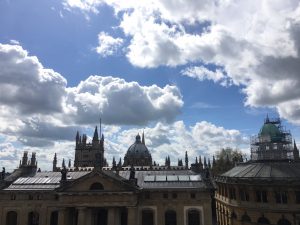