Waugh and the Oliviers

Posted by Rebecca Moore in Waugh and Words on March 9, 2015

In light of the V&A recently making available around 200 previously unpublished letters between Laurence Olivier and his then wife Vivien Leigh I decided to do some searching of Waugh’s letters and diaries to see if he ever referred to the pair.

Along with references to his attendance at the 1955 production of Titus Andronicus in Stratford, starring both Laurence and Vivien (for which he wrote a very positive review for The Spectator), there are various letters between Waugh and his agent A.D. Peters regarding a film adaptation of his 1948 novella The Loved One which reveal an unrealised collaboration with Hollywood’s golden couple.

In 1948 Waugh wrote the following postcard to Peters:

‘Not keen on dramatization of Loved One but open to persuasion. Name of dramatist unimportant but he must submit detailed scenario. Then if I approve he can go ahead but I retain right of censorship over all dialogue. Sir L. Olivier thinks it will make a film. He must be insane.’ (Letters, pp. 322-23)

Six days later, after visiting the doctor and the dentist Waugh had lunch with Tony Bushell (film actor and producer, who incidentally had a bit-part in Olivier’s Hamlet) and two of his colleagues to ‘discuss a film for Lady Olivier’ [Vivien Leigh], presumably The Loved One. Other correspondence between Bushell and Waugh suggests that Laurence Olivier may have had some interest in directing this adaptation. Olivier, according to Waugh, may have had one of three reasons for asking to direct the film; that he wanted to make a fun film to show friends, that he wanted to spin a particular moment of the novella into a film or that he perhaps didn’t mean The Loved One at all but Brideshead Revisited. Waugh had written an analysis of the important points of the Brideshead some time in the past and given this document to film director Carol Ward with the idea that he would pass it on to Olivier. Waugh was of the opinion that Brideshead would make a very good film and was particularly excited by the idea that this might be what Olivier was really interested in filming. He even suggests that there would be an excellent part for Vivien in it, though he was less sure about a part for Laurence. This is, of course, quite funny, knowing that Laurence Olivier would go on to play Lord Marchmain in the 1981 Granada TV adaptation of Brideshead.

In fact Waugh would not see a production of Brideshead in his lifetime, having spent a month in Hollywood at MGM’s expense in 1947 to discuss an adaptation which was ultimately due to fail. Waugh deplored the way none of the writers saw the ‘theological implications’ of the story, and was not about to agree to a Hollywood ‘love story’ version of his novel. He was equally distraught about the 1965 film of The Loved One. In a letter to Nancy Mitford Waugh wrote of the adaptation:

‘The film of Loved One is a great annoyance to me – one of the few occasions where [A.D.] Peters [Waugh’s agent] let me down. He sold it years ago to a mad Mexican for a paltry sum with the assurance that it would never be produced but that Alec Guiness and I might have an agreeable jaunt together in Mexico. The next thing I heard was that an American company had bought the rights from the Mexican and were producing an elaborate travesty. No redress.’ (Letters, p. 715)

(Theatrical Trailer for The Loved One 1965) 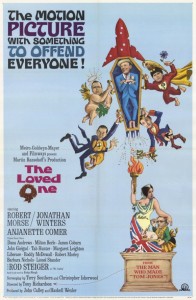 Film poster for Tony Richardson’s The Loved One (1965)

Advertised with the tagline ‘The motion picture with something to offend everyone!’, The Loved One was directed by Tony Richardson, not Laurence Olivier (though interestingly the pair had worked together on The Entertainer in 1960) with a screenplay by Terry Southern and Christopher Isherwood. It made an estimated $2 million at the box office so perhaps it wasn’t as unsuitable for film adaptation as Waugh thought, but I can’t help but think how different it might have been with Olivier behind the camera.

5 responses to “Waugh and the Oliviers”