On 20 December last year John Freeman – soldier, Labour politician and television interviewer – died aged 99. As an interviewer for the BBC, Freeman will be remembered for his series Face to Face (1959-62) with its distinctive format and Freeman’s brand of incisive questioning. His style was at the core of the show’s depth and success. Impeccably polite, Freeman’s technique was calculated to negotiate the tricky boundary between friendly probing and impertinence. Freeman secured interviews with an astonishing number of cultural and political icons: Carl Jung, Bertrand Russell, Martin Luther King Jr., Edith Sitwell, Henry Moore and, in a memorably edgy exchange, Evelyn Waugh. Recalling the 1960 interview with Waugh in later life (as can be seen in the YouTube clip below), Freeman told the BBC of his disappointment that, he says, ‘I didn’t succeed in getting more out of him because of all of the people on the list of Face to Faces he is the one whom I think I hold in most honour’.

Waugh was well aware of the potential dangers he faced in entering Freeman’s territory. Christopher Sykes described Face to Face as a programme where ‘Well-known people of the day were interrogated on their tastes, beliefs and hopes by one or other of a team of skilled questioners’. And of these interrogators, Freeman was the ‘acknowledged master of technique’. [i] Waugh was suspicious of Freeman from the outset: ‘Who is this man? Will I be able to ask him a few questions?’ [ii] A few weeks before the interview Waugh wrote to Tom Driberg, who knew Freeman from his time in left-wing politics, to ask for some ammunition with which to mount a defence against his questioner. His anxiety over the interview is clear: ‘I have let myself in for cross-examination on Television by a man named Major Freeman’ he writes. ‘Do you know anything damaging about him that I can introduce into our conversation if he becomes insolent?’ [iii]

Though likely a (half-)joke request, the letter betrays Waugh’s misunderstanding of the format of Face to Face as a piece of television. Interviews for the programme were conducted face to face (as its title makes plain), but it is only the interviewee who fully appears on camera. The parity implied by the title is not translated into any on-screen competition for the camera’s eye between presenter and guest. The interviewee remains the sole visual subject of the interview while Freeman keeps himself out of shot. His voice is not entirely disembodied, however, as his head and right shoulder are sometimes visible, but only from behind. 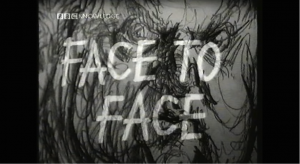 Waugh’s hope that he might ask Freeman a question or two, however unserious, presumes that the interviewer/interviewee relationship could be reciprocal. Waugh had form on this. Charles Templeton, an interviewer for Canadian network CBC, remembered Waugh asking him several times during an interview ‘Are you sure you’ve read any of my books? […] Are you certain, Mr. Templeton, you have actually read my books?’ [iv] But the rhythm of Freeman’s questions on Face to Face, by contrast, was not to be interrupted by questions from the subject. And, it is clear in the programme, Freeman’s excellent research into Waugh’s work far exceeds Templeton’s (whose memoir recalls speed reading three of Waugh’s books ‘holed up in my hotel’ before the interview). The interviewer/interviewee dynamic demonstrates that one of the unique strengths of Face to Face was that Freeman’s questions, however much Waugh affected a pose of boredom, could rattle his subject to such a large extent. Waugh does get at least one kick into Freeman, though. When asked whether he holds ‘in fact a particular deep feeling’ about the BBC based on how it is represented in his novels, ‘Well,’ Waugh replies, ‘everyone thinks ill of the BBC, but I don’t think I’m more violent than anybody else’.

Freeman’s questions were delivered rapidly and in a relatively dispassionate manner, sometimes prefaced with a qualifying phrase hoping to limit the offence taken at his more probing enquiries. Waugh took particular dislike to one of Freeman’s psychoanalysis-infused questions about how he felt the absence of a female sibling in the family home had impacted on his development. He wrote to Nancy Mitford shortly after the interview that ‘The man who asked the questions simply couldn’t believe I had had a happy childhood. “Surely you suffered from the lack of a sister?”’ [v] Waugh, then, was quite justified in his pre-interview fear that he was about to be put on trial. Only a couple of months after Waugh’s Face to Face interview, Freeman brought Gilbert Harding to tears when he asked if Harding had ever been in the presence of a dead person. Harding later revealed that he had been present as his mother’s death.

Arguably, however, the seriousness with which Face to Face treated itself and its subjects created a space where Freeman’s questions about death, sex, mothers, fathers and class represent legitimate intellectual enquiries. This atmosphere was achieved in part by the series of often-grotesque portraits of the subject by Polish-born draughtsman Féliks Topolski with which each episode opened. The drawings of Waugh are infused with particular menace. The camera pans over Topolski’s images in various sketchbooks and then, after pausing on the final portrait, fades into a close-up shot of Waugh in the interview chair. The one image makes way for another and those of Waugh’s features that Topolski had exaggerated in his drawings become evident. 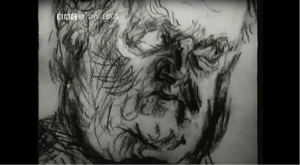 The slippages between the drawn portrait and the television image allude to one of the implied aims of Face to Face’s interviewer/interviewee dynamic. The portraits serve as manifestations of some of the interviewee’s many public faces. Freeman’s task in the interview was to put Waugh in dialogue with these faces and, in doing so, reveal something of the mind beneath. As such, Waugh is less ‘face to face’ with Freeman than he is put in a more symbolic interaction with himself, with Freeman functioning as conduit. This is further evidenced when Freeman invites Waugh to consider how his lived experience of a breakdown maps onto Gilbert Pinfold as a novelist’s rendering of himself in fiction. Waugh had earlier coyly parried Freeman’s assumption that his time as a schoolmaster resulted directly in Decline and Fall (1928), but he willingly informs us that Pinfold’s auditory hallucinations can be read as largely verbatim transcripts of his own experiences. It is this slippage between fiction and autobiography that Face to Face is most concerned to pronounce through the course of the interview.

Freeman’s intention to disappear into the background of the programme represents something of a contradiction based on the way that Face to Face has been remembered since the end of Freeman’s involvement with it in 1962. Often it is Freeman himself who was at the centre of the debates brought about by the programme. Sykes recalls watching the Waugh interview with outrage at Freeman’s insolence and admiring his friend’s composure: ‘[Waugh] refused to show the indignation he felt at the disregard of privacy which such a performance implies; as preposterous question followed preposterous question, he smiled indulgently, failed to rise to the questioner’s bait, made his views clear in a calm manner which did not disguise his contempt’. [vi] The interviews with Tony Hancock and Gilbert Harding in particular have been remembered for the questions raised over Freeman’s insensitivity towards his guests when probing their insecurities.

But Face to Face, defined as it is by Freeman’s experiment with presence and absence, forms a suitably complex medium in which to explore complex public figures. And it is Freeman’s characteristic tendency towards over-earnestness that gave the show the prestige with which it was and continues to be held. In the act of removing himself from the screen Freeman made himself the enigmatic centre of the show. His presence is implied by the interviewee’s reactions to his questions and physicality. Waugh’s refusal to meet the off-screen figure’s eye might suggest an insecurity to regard with sensitivity, or – as is more likely – an opportunity for Freeman to press on and probe deeper. Contrary to what has often been remembered of Waugh’s interview the exchange was not as barbed as it might have been. Though certainly more amicable and symbiotic than Waugh’s interview, Freeman’s meetings with Bertrand Russell and Carl Jung, for instance, are possibly less revealing for the absence of real discord. At its best, Face to Face, with Freeman pulling the strings, turned the interviewee’s anxieties and reservations about appearing on television – which were profound Waugh’s case – into the content of a programme which was essential in the development of the television interview as it exists today.