Posted by Rebecca Moore in Waugh and Words on October 6, 2014 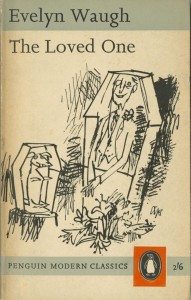 It has been a busy few weeks for the Evelyn Waugh book group, what with the 1920s party on Thursday 2nd October (photographs coming soon!). Our meeting on Saturday the 27th September saw us talking about Waugh’s 1948 novel The Loved One. Grim, funny and darkly satirical, it tells the story of Dennis Barlow’s experiences in Hollywood, amidst an expatriate community of ageing British writers. It contrasts the absurdities of two funeral businesses, one for pets, ‘The Happier Hunting Ground’ and the rather more deluxe surroundings of the ‘Whispering Glades Memorial Park’ (based on the Forest Lawn Memorial Parks) which serve the ‘Loved Ones’ of the novel’s title.

It was noted that the satire of the novel might not be as immediately cutting today as it was when the book was published, due to the increasing influence of American culture on Britain over the years, but that is not to say it isn’t there! Two things that struck the group were the manner in which Waugh describes American women, and the depiction of the utterly callous ‘machine’ of Hollywood.

The following passages sum up Waugh’s impression of American women:

‘A young lady rose from a group of her fellows to welcome him, one of that new race of exquisite, amiable, efficient young ladies whom he had met everywhere in the United States.’

‘She was the standard product. A man could leave such a girl in a delicatessen shop in New York, fly three thousand miles and find her again in the cigar stall at San Francisco.’

There is one exception in the novel however, in the character of Aimée Thanatogenos:

‘the girl who now entered was unique. Not indefinably; the appropriate distinguishing epithet leapt to Dennis’s mind the moment he saw her: sole Eve in a bustling hygienic Eden, this girl was a decadent.’

The group found it strange that Dennis should be so drawn to this character (to the point of proposing marriage), and find her so unique in comparison to the other women he meets, before treating her so callously at the end of the novel. Aimée may have been granted the opportunity to speak her own mind in the epistolary sections of the novel, but the reader is still rather unsure of her personality – details of her history and family are equally lacking and it is perhaps this blankness which makes her eventual death so easy to cover up by Mr. Joyboy and Dennis, two men who both claimed to have loved her. It was the callousness shown by Waugh in writing Aimée’s demise that the group found hardest to reconcile, yet it cannot be denied that the ending to the novel is darkly humorous. (I will not go into too much detail here as it will rather ruin the ending.)

Dennis’ whole attitude appears to change as the novel develops and there was some discussion as to why this might be. One idea was that the general atmosphere of the film “factory” of Hollywood may have disillusioned the young British writer in the way it had been experienced by so many of his predecessors, both real and literary. We found that the image of the factory is also pertinent to the funeral business Waugh depicts in the novel – endless ‘Loved Ones’ churned out as if on a production line, passing through different areas of the funeral home before their final presentation to the ‘Waiting Ones’ in the ‘Slumber Room’.

There is, of course, much more to say about this short yet richly allusive novel, and I invite you to continue the discussion in the comments if you so wish!

Our next meeting is on the 8th November at 11am in Leicester Central Library where we will be discussing Men at Arms (1952).

One response to “The Loved One”