Posted by Barbara Cooke in Waugh and Words on April 7, 2014 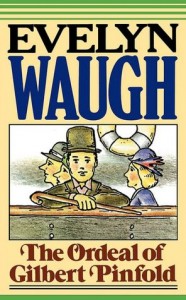 Evelyn Waugh’s last stand-alone novel was published in 1957, nine years before his death. It is an uncomfortable book. It is significantly autobiographical, and many of us felt that the harrowing and distressing subject matter made this not “a typical Evelyn Waugh novel.”

The group noted that Waugh had introduced characters who behaved oddly or displayed mental instabilities in a number of novels.

1. The 1934 novel A Handful of Dust has Tony Last endlessly reading Dickens novels to the isolated Mr Todd in the South American Jungle.

2. The 1928 novel Decline and Fall contains Professor Silenus, who entertains some dubious architectural ideas regards access to upper floors and poor old ‘Prendy’ who, filled with doubt, comes to a very sad end.

3. Sword of Honour has a trio of eccentric officers including the hapless Apthorpe and the ‘King Kong’ training officer on Mull, who manages to maim more men than the enemy plus Brigadier Ben Ritchie Hook who commandeers Apthorpe’s mobile latrine, the ‘Thunder Box’.

There are a number of interesting naming choices in the novel. Firstly, the SS Caliban which carries Pinfold on his voyage is named after the character in Shakespeare’s Tempest. Caliban is the only human native of an island that is otherwise “not honour’d with a human shape”. Additionally, Pinfold nicknames one of the female voices ‘Goneril’; the eldest daughter of King Lear, Shakespeare’s Goneril was prepared to lie to her father to further her own ambitions. Perhaps more disturbing is the use of Waugh’s daughter’s name Margaret  in the narrative. Pinfold hears his tormentors offering their daughter Margaret sexually to him, and Margaret’s father regrets that he couldn’t have been the one to “teach her” about sex. Waugh revealed in a letter to a friend that his attraction to his own 10-year-old daughter Margaret receded after this episode in “Pinfold’s” life…Many of us were intrigued by the numerous references to the ‘little dark man’ who sits in splendid isolation in the ship’s dining room. Waugh never explains or explores this character but could the author be pointing to his own exclusion from the ‘top’ or ‘captain’s table’ in life? Perhaps the ‘darkness’ of this character refers not to pigmented skin or hair, but to an ‘alter ego’ experiencing inner turmoil.

Amy made a fascinating observation regarding the existence of the ship. Could the entire drug- and alcohol-fuelled episode aboard ship be hallucinatory? The steel walls of the ship and the sea could be a metaphor for institutional care, with no escape possible. This idea of claustrophobia is also present earlier in the novel, when Pinfold, confined to the library fire, looks out of the windows of his family home onto a hostile winter landscape.

Pinfold states he envies painters, who are allowed to return to the same theme time and time again, clarifying and enriching until they have done all they can with it. The group commented that Waugh himself took the opportunity of book reprints to amend or remove text to reflect changes of his own and society’s views. We also discussed Waugh’s readiness to write for money and produce a great deal of copy, and Tom wondered if Waugh sacrificed quality for quantity. Could he have written more ‘Grade A’ work if he had resisted the cash lure of Grades B and C? The group noted that Pinfold hoped his work as an author would still be being read and appreciated in the distant future. 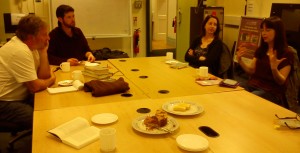 Amy discusses the idea of the ship as an hallucination.

The group discussed whether Waugh’s ‘self hatred’ influenced Pinfold and his other novels. It seemed to some that despite his upper middle class upbringing and education, Waugh was not quite in the same social strata as the people he admired. Would his friends have thought him PLU (People Like Us)? His idolatrous reverence for birth and wealth may have influenced his actions throughout his life. Is it a coincidence that he spent whatever he earned immediately?Gilbert Pinfold in the novel has a small overdraft at the bank and never earned a penny of interest, which suggests that Waugh may not have been cash rich. Waugh left £20,000 upon his death in 1966 (in today’s money that equates to £315,000). This seems a lot of money, but not if it includes the value of the family home. Combe Florey House was offered for sale in 2008 at £2,250,000 which, allowing for the alarming rise in house prices, would suggest that money was tight.

It seems somewhat ironic that a man so conscious of image and public perception is alleged to have died whilst sitting on the toilet (or more correctly, lavatory). A final failure to live up to his life long aspirations?

The next meeting will be May 17th to discuss Vile Bodies (1930), Evelyn Waugh’s second novel.

3 responses to “Book Group: The Ordeal of Gilbert Pinfold”