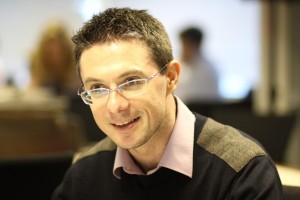 We’re lucky in SAPPHIRE to have lots of incredible researchers doing fascinating work. These SAPPHIRE Spotlight profiles will highlight some of them and their exciting research projects.

The series starts with Dr Damian Roland, who is a Consultant at the University of Leicester NHS Trust and Honorary Senior Lecturer in the SAPPHIRE group. Damian’s clinical specialty is Paediatric Emergency Medicine, but his research involves not only clinical themes such as the identification of serious illness in children but also a focus on medical education and the interaction between social media, education, and academic research.

Damian was recently part of a small team awarded the first prize in the Stanford Medicine X | Symplur Signals Research Challenge 2015, a competition intended to encourage research into social media and healthcare. The award-winning research examined the #FOAMed hashtag, an acronym for ‘Free Open Access Medical education’. FOAM is a constantly-evolving, globally accessible, online collection of medical resources – essentially a way of crowdsourcing medical learning. The hashtag allows twitter users from across the world to share information, discuss and debate, issues and search for answers to queries. The team’s research examined the use of the hashtag on twitter, and analysed the data to prove that the users of the hashtag could be correctly described as members of a true ‘community of practice’.

Damian explained that the research is significant because it “gives a degree of credibility to a movement which has been criticised as lacking peer review and being beholden to a few key individuals.” Damian is a staunch advocate of the benefits of social media, and is a prolific tweeter and frequent blogger himself.

He’s concerned that the term ‘social media’ is often misunderstood: “It is often viewed as just one thing but in fact usually involves multiple platforms and tools through which you can access, curate, and disseminate information. It gives me considerable advantages both in terms of keeping up to date on current literature and spreading the word about my own research.”

An active member of the FOAM community, Damian is keen that it is understood as a movement, rather than something static. He reflected that it’s based upon the principle “that good educational materials are there to be shared and that there are many clinicians and professionals with the passion to produce them and to learn from those produced by others.” The movement originated in the critical and emergency care community but has spread across many other specialities, demonstrating medical professionals’ dedication and enthusiasm for improvement and education.

Damian commented, “I’ve learned a great deal from FOAM content (whether it be blogs, videos, or podcasts) but even more important has been the contact with the community of individuals, and the shared learning that this has generated. These interactions have been the most powerful drive for me to remain engaged.”

There are certainly links between this research and some of his previous work on twitter at conferences, where communities often develop rapidly and even include those who can’t be present at the event but follow it through live-tweets or other social media updates. Damian feels that next step in this line of research is to confirm that the #FOAMed hashtag wasn’t an isolated event. He hopes that examining other hashtags will lead to the ability to predict when digital communities of practice will occur and what factors are necessary to create them.

As Damian noted, “the time has come for the medical community to stop seeing social media as a novelty and recognise its intrinsic value in, and of, itself.”

Communications Assistant to the SAPPHIRE Group