Video to kill the long project report? or, the potential use of Digital Storytelling

Posted by Andrew Burnham in Data For Research Blog on September 13, 2013

Yes, the title baffled me too.  It did however lead to this: 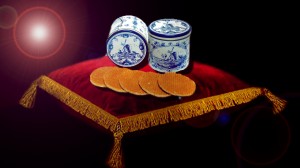 A tin of waffles on a cushion

I will explain later.

For the last year I have been working on a data management research project funded by the Jisc Transformations programme. A benefit of this has been that I was guided towards things, including attendance at this event – that otherwise I probably wouldn’t have seen, or thought about.

The particular link to my research project was the following funder requirement:

“…required to create a brief audio and/or video description of their project; what it has achieved and the main findings from their work by the Business Change Manager/Project Sponsor.”

As it transpires I’m pleased I went to Newcastle.

Initially it was the best chance that I’d had to that point to talk face to face with others running projects within the same programme and to share experiences. From that opportunity for example it became clear that it was far from unusual to find that such a project (based on the use of technology to create change, or a transformation) had unearthed a broader/greater/longer-term theme or challenges/problems that there was a need to look at. The flip side of this positive was of course the challenge for a Transformations project manager to try to reign in enthusiasm – to remember what the original project was, and what they were expected to deliver in 12 months.

Anyway… the Digital Storytelling course itself.

Usefully, the research programme manager (Lawrie Phipps) was present for part of the day and brought in the perspective of someone who has to wade through long project reports which often struggle to shine light on matters such as what the projects are actually about, why they exist and what they have actually changed. The purpose of the course was therefore to present an alternative (or of course complementary) approach of using stories – in the form of short audio/image/video products – as a communication device.

To be honest this was initially a bit of a challenge for me, and as a number of attendees had journalistic experience I did wonder what I would get out of it.

By the end of the day however I had concluded that there is definitely a point to this. Having spent so many years around IT folk, and more recently with researchers, a purely personal view is that … I have to say … communication with other humans/the non-IT world is often not a strength (diplomatic enough?).

From a personal perspective, I must admit that I enjoy writing long reports (worse still even when I know I will probably be the only one to read them).  Often they are what is demanded or expected … but equally I recognise that this is not always the right or only communication tool.

So, whilst some of the terminology in the course made me wonder a little (identifying the ‘dragon you have slayed’ etc.), I agree sometimes, in 2- 4 minutes, with audio, images and video you can communicate far more effectively and add so much more.

The process of creating my data management story
One of the benefits of using this approach is that you need to think about what, in succinct, easy to understand terms, your work is about – what it adds, what change it results in etc. The challenge is to create something that in a couple of minutes will engage someone who knows nothing about the work, and then hold their interest.

This was particularly difficult for me as whilst I had ideas about what I wanted to include I didn’t have the skills or equipment to tie these elements together into a coherent story.  Equally I wanted to include music or background sound but didn’t really know how to make that work or fit alongside recorded speech.

The challenge to produce this (rather than just an audio file of me reading a script) was met as I was able to work with Andrew Williams, a contact made as he works with the Space Research Centre.  I could say “I want zeroes and ones falling off the screen” and that’s what he produced.

Also I am grateful to four people: Jo Brewis, Jim Pearson, Kay Phelps, and Martin Stannard, who agreed to be interviewed and photographed, and to talk about research issues from their own perspective. As a result I had contributions from each of the 4 Colleges.

So, the end result is now available on YouTube as “What is the link between a tin of Dutch waffles and the success of your research?” and also via the Research Data Management website – www.le.ac.uk/researchdata.

Where Now?
Whilst this method may replace some long reports I think it has value independently of this as another method of communication.  Typically we work with researchers who have a range of requirements and want a range of IT based facilities, such as public facing websites, blogs, wikis, internal project information sharing etc. as well as traditional IT products such as a databases.

I think this has potential general value for researchers who want a method to generate interest and engagement, and describe what the research will be/is/was.

To do this of course we need the means to create digital stories.  To that end I will soon be attending a training course and hope to make the required support and equipment available so that others can create their own digital stories.

Oh, the image above.  Well, if you watch the digital story – “What is the link between a tin of Dutch waffles and the success of your research?” – then it will make sense.

Andrew is a Senior IT Partner at the University of Leicester.