Remembering a difficult past 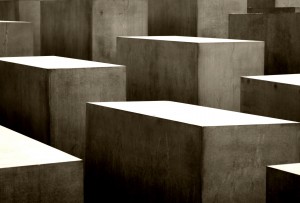 Memorial to the Murdered Jews of Europe, Berlin
(Photo by Matt Keyworth 2007)

Next week I embark on a fieldwork trip to Bavaria and Austria, as part of ongoing research into memorialisation and the Holocaust, and in particular the concept of ‘dark tourism’ as it applies to sites of former concentration camps. I approach this trip with a mixture of excitement and trepidation. I’m not sure if ‘excitement’ is the right word when visiting sites of such mass suffering, de-humanisation, and death. Although, the term ‘dark tourism’ infers that many visitors to these sites go there to fulfil some morbid curiosity or to gain ‘vicarious thrills’. I suppose I’m just eager to actually go and see the sites I have spent so long reading about, and that are such a primary focus of my current research. But it also has this sense of trepidation in that I’m not really sure how I will feel, and it’s not likely to be a pleasant experience. To me the decision about whether to visit the actual site of such atrocity is a real moral dilemma. Tim Cole, in his excellent book ‘Selling the Holocaust’ (2000), summed this up well when describing his own visit to Auschwitz: “We were tourists of guilt and righteousness: guilt at an almost pornographic sense of expectancy of the voyeurism ahead. And yet guilt tempered by a sense of righteousness at choosing to come to the place.” (p. 98)

This guilt and voyeurism seems to come from this sense that the concentration camp is something taboo, something not ‘meant to be seen,’ something too awful to confront. But morally it also feels right – that need to remember, to bear witness – that morally, it is the only thing to do… Nevertheless, despite my interest in the area I chose not to visit Dachau when I was in Munich a couple of years ago. As we passed the signs to Dachau just outside Munich I felt a social and moral obligation to go. Visiting such sites is now a common travelling experience, as evidenced by the increasing numbers of visitors to such sites – for example over 1.4 million people visited Auschwitz in 2012 alone. But I was travelling with my husband and his friend at the time, and my husband felt that visiting the camp was unnecessary – we don’t have to see an actual camp to know that the Holocaust happened, and that it matters to us. It was certainly not something that he wanted to do whilst visiting the beautiful mountains, castles and countryside of Bavaria. His friend had been to Dachau before, and it wasn’t something he was that motivated to do again. For him it was perhaps a reminder of a more difficult cultural heritage as his grandfather fought for Germany in World War II, and his mother grew up in post-war East Germany.

Concentration camps as sites of public memorialisation have always been highly controversial. We perhaps take our accessibility to them for granted nowadays as visiting such sites, and sites of other deaths, become more and more acceptable and commonplace. But those sites opened to visitors shortly after the end of World War II did face public opposition and condemnation. In some cases they were seen as a moral affront to the victims, or a difficult reminder to those still residing nearby. In many cases it was the message they promoted that was problematic, as sites chose to recognise some victims and ignore others, or created a dissonant narrative about the past. 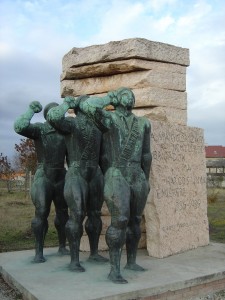 It is this political and socio-cultural construction of the past that interests me the most with these sites. Who decides what specific places become public sites of memorial? What agenda is set as to how, and who, we remember? How does memorialisation change as the political and cultural climate shifts? I was struck with such questions when I visited Budapest in 2007. Like many Eastern European countries it is scarred by the Holocaust (and it’s co-operation with the Nazis) and it’s subsequent Soviet occupation (and even today has arguably not reconciled this with its more capitalist, post-Soviet present). Budapest’s House of Terror is one of the darkest but most fascinating places I’ve ever visited. It really made a powerful impact on me – that one place could be at the heart of both the Fascist and Communist regimes, and witness such abuse of human rights and suffering, and all within the lifetime of my parents’ generation. 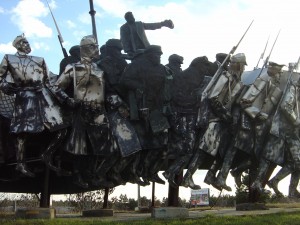 I also visited Budapest’s Communist Statue Park (Szoborpark). Located in a very residential district of Budapest, it has quite an unsettling effect to see these huge public monuments to Communism gathered together, and surrounded by family houses. The creation of this memorial park was a very controversial enterprise. They are a reminder of a difficult period of quite recent history. These monuments were designed to celebrate Communism and it’s role in Hungarian culture, but the meaning of them has changed. Monuments become memorials to victims of the Communist regime. To me the experience was a little tragic – these displaced and sometimes defaced monuments, stripped of all context – and rather eerie in a way. I know that this memorial park and others like it (i.e. Grutas Park in Lithuanian and Fallen Monument Park in Russia) remain divisive within the local populations. They perhaps cater more to us Western tourists than to those struggling to redefine their national identity, and live with the past tragedies and injustices. Maybe some people don’t want to remember. Or don’t agree that this is the right way to remember.

As well as visiting the former concentration camps of Dachau and Mauthausen over the next couple of weeks, in June I will be visiting various memorial sites in Berlin, such as the Memorial to the Murdered Jews of Europe (pictured above). The commission of public memorials to victims of war and genocide can be especially contentious in countries that hold, or share, responsibility for those deaths. For example, how do nations deal with their own omissions, moral cowardice and complicity in the Holocaust? This was something that was touched upon in the recent Stanley Burton Centre Aubrey Newman lecture by Professor Robert Gordon. In this compelling public lecture, he focused upon how Italians have sought to reconcile Italy’s part in the Holocaust – it’s Fascist and Anti-Semitic past – and how the nation’s narratives of the Holocaust change. I’m interested in how Germany and Austria memorialises the victims of the Holocaust. How do you memorialise the victims of the Holocaust in Germany, bearing in mind a large number of Germans were involved in the Nazi administration responsible for the deaths? How has the Holocaust been publically remembered in Austria, the first Nazi-occupied country and therefore a ‘victim state’ or a country that already harboured Nazi and Anti-Semitic sentiments prior to its occupation? These, among others, are questions I hope to consider in forthcoming blogs…