Posted by Norman Housley in Cross and the Crescent: Crusading and the Contemporary World Blog on May 15, 2013

For further information on the symposium that I write about here, see:

These are exciting times for Croatia. In June 1991 the country declared its independence from Yugoslavia, triggering that state’s demise. The founding fathers of the new Croatia were reasserting a sovereign status that their ancestors had lost as far back as 1102, when the medieval kingdom embraced union with Hungary. Since 1991 Croatia has built up the international credentials befitting a respected sovereign state, ranging from membership of the UN to the provision of troops for Afghanistan. And on 1 July 2013 the republic will place the coping stone on that process when it becomes the 28th member of the EU. So in the space of not much more than two decades Croatia will have become an independent state for the first time in nine centuries, and located its future within the political framework of the European Union. 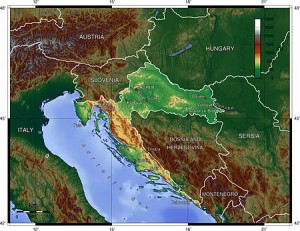 By a happy coincidence, two members of the University’s School of Historical Studies have recently published monographs that deal with Croatia’s past. My book, Crusading and the Ottoman Threat, 1453-1505 (OUP), includes treatment of the role that Croatia played in the defence of Christian Europe against the encroaching Turks.

And Alexander Korb’s highly praised Im Schatten des Weltkriegs, Massengewalt der Ustaša gegen Serben, Juden und Roma in Kroatien 1941–1945 (Hamburger Edition), examines the most notorious phase of recent Croatian history. In 2012 Alex and I agreed that this serendipity was too good to waste, and we formed the idea of holding a symposium in Leicester on the theme of ‘Croatia and Europe’. With welcome sponsorship from the Royal Historical Society and the Croatian Embassy in the UK, the symposium took place on 27 March and by general agreement was a signal success. It was particularly pleasing that the Croatian ambassador, Ivan Grdešić, found time in his busy schedule to come to Leicester and listen to the five papers.

By any standards Croatia’s history is a rich and turbulent one. It reminded me of Saki’s famous witticism about the people of Crete, that ‘they create more history than they can consume locally’. Croatia’s distinctiveness starts with its geography, for it has one of the most unusual shapes of any European country. At our symposium Ivo Banac, the doyen of Croatia’s modern history and a former minister in the fledgling republic, compared his country to a croissant, with spurs projecting eastwards and southwards from the historic core south of Slovenia. This geographical sprawl helps to explain the destructive character of the war for independence in 1991-95, when fighting extended from the Danube to the southern Adriatic. The end of the war brought peace but not stability, as Banac showed in his sombre overview of developments during the last twenty years.

The question of Croatian identity remains intriguing. Clearly the new republic is founded on a consciousness of nationality which has deep roots, part ethnic, part religious and part cultural. But those roots are also unusually complex. In the past unity has been expressed most vigorously when the Croats faced strong external forces that were seemingly bent on their subjugation or control. These forces have ranged from the Ottomans through the Habsburgs to the Serbs. When Croatia was subsumed within larger political structures, its people were all too often short-changed. Particularly sad was the plight of those Croats who fought for Austria-Hungary in the First World War. John Paul Newman showed at the symposium that these veterans were effectively ostracized in the south Slav, and Serb-dominated, state that was created after the war ended. Now that the Croats have finally been freed from Austria, Hungary, Serbia, Venice and the Ottoman Empire, and are able to forge their own future, what will they do with their independence?

The answer may lie in the EU. Both my paper and Alex Korb’s focused on periods when the most vocal Croats insisted on their country’s European identity. Indeed they emphasized its function as a bulwark that was protecting the rest of Europe from barbarian hordes – Turkish in the fifteenth and sixteenth centuries, ‘Bolshevik’ in the 1940s. In neither instance did the rhetoric serve Croatia particularly well. Crusaders did not flock eastwards to man the ramparts against the Turks – the human traffic was all in the opposite direction, as Croatian humanists, artisans and merchants sought safety and employment in Italy, Hungary and Germany. Later they were joined by career soldiers; for Wendy Bracewell showed at Leicester that the liveliest image of the Croat – dare-devil, ferocious and armed to the teeth – was created by the diaspora of these men in the eighteenth century. As for the European ‘New Order’ that the Ustaša espoused and defended, it was patently camouflage for the interests of Greater Germany.

Those are not promising precedents, but of course the EU is a very different prospect from the fractured Christendom of the Renaissance, or the European future envisaged by the Nazis and their smaller partners. This new arrival on Europe’s diplomatic stage may find that after nine centuries’ experience of political systems that let Croatia down, the EU finally meets its needs. Not that 1 July marks the end of the story. Rather, the debate about identity will move from Zagreb to Brussels. Both the character of Europe and the future development of the EU remain subject to debate, and the Croats can be relied upon to make lively contributions to it, derived from the experiences of their own colourful past.

Follow our current Leverhulme – funded project about the later Crusades:
Reconfiguring the Crusade in the Fifteenth Century

Posted in interfaith relations, The Crusades | Leave a response