Posted by Barbara Cooke in Waugh and Words on September 3, 2015 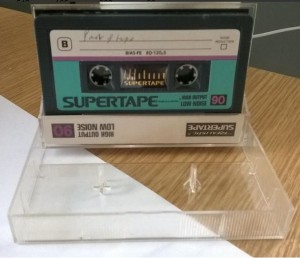 Something rather exciting happened to Alexander Waugh and me over the summer. When I have time I’ll tell you all about it, but for now the highlight is this: when digging around in Dr Winifred Bogaard’s personal archive, we found five, never before heard cassette tapes (I include an image for the benefit of younger readers) of interviews recorded with important figures from Waugh’s life.

One of these was Auberon Waugh.

On the tape, to which I listened at home on an ancient ghetto blaster (under-20s: they look like this), Dr Bogaards asked Auberon why he thought Helena was his father’s favourite novel. Auberon gave two reasons:

1. In Helena, Waugh is deliberately manipulating history to fit his own view of the world. 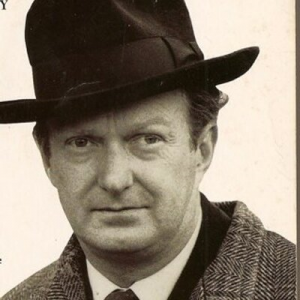 2. Parents always love the runt of the litter, and Helena was poorly received.

I’d love to hear your thoughts on 1. As for 2. – well, I can only say that the Book Group is developing a similar tendency. Hot on the heels of our unexpected pleasure in the much -maligned A Tourist in Africa, we also found Helena vastly endearing. Elizabeth-Anne even considered it to do much more for the Catholic cause than Bridehead Revisited – though does not plan to cross the floor any time soon.

Helena is Waugh’s only historical novel. It follows the legend of the supposedly British St. Helena, mother of the first Roman Emperor to convert to Christianity. Helena follows suit and, after a life spent avoiding (but losing most of the male members of her family to) the intrigues of Roman politics, goes on a pilgrimage to discover the True Cross (i.e. the crucifix on which Christ died):

“Nothing ‘stands to reason’ with God [said the bishop]. If He had wanted us to have it, no doubt He would have given it to us. But He hasn’t chosen to. He gives us enough.”

“But how do you know He doesn’t want us to have it—the cross, I mean? I bet He’s just waiting for one of us to go and find it—just at this moment when it’s most needed. Just at this moment when everyone is forgetting it … there’s a solid chunk of wood waiting for them to have their silly heads knocked against. I’m going off to find it,” said Helena.

Helena’s 1950s idiom put contemporary reviewers off Helena. They were not used to history, and especially religious history, written so colloquially. The book also suffered from the old curse that anything Waugh wrote that wasn’t satirical or overtly autobiographical inevitably failed to meet the expectations of his reading public. But we found a lot to discuss in the novel, which is remains noteworthy for telling ancient Roman history from a woman’s point of view. It is also just as critical of “Society” as Vile Bodies and A Handful of Dust, and provides unique insights into Waugh’s theology.

Some of the group had a problem with the fact that nothing seems to happen in Helena until she sets off on her pilgrimage as an old woman. Most “important” events – army clashes, usurpations and poisonings – happen offstage. For example, a newlywed Helena is told by her husband that he just needs to “tidy a few things up” – a euphemism, it transpires, for re-drawing the structures of power by betraying and slaughtering an entire army. First her son Constantine and then her grandson Crispus pop up at her villa at moments of crisis before disappearing again for years on end. Helena is promised a visit to Rome as a young girl, but doesn’t get there until her son and grandson are fully grown. Her disillusionment with ‘The City’ fuels her determination to find something better, something true. It’s a brave move, some of us thought, to devote so much of a novel to tedium. You could argue that it makes the final revelation all the more profound, and the theme of the ‘latecomer’ to faith is obviously close to Waugh’s own heart. Helena is made to identify with the three wise men, and prays to them on a visit to Bethlehem: 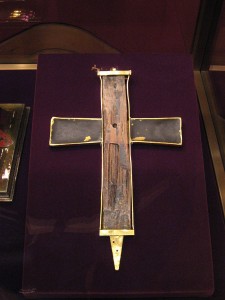 A fragment of the True Cross, Vienna. Source: Wikipedia

“You are my especial patrons,” said Helena, “and patrons of all late-comers, of all who have a tedious journey to make to the truth, of all who are confused with knowledge and speculation, of all who through politeness make themselves partners in guilt, of all who stand in danger by reason of their talents.

“Dear cousins, pray for me,” said Helena, “and for my poor overloaded son. May he, too, before the end find kneeling-space in the straw….

“For His sake who did not reject your curious gifts, pray always for all the learned, the oblique, the delicate. Let them not be quite forgotten at the Throne of God when the simple come into their kingdom.”

British, no-nonsense Helena rejects the gaudy, superficial Christianity adopted by her son and his court, instead coming to ‘kneel in the straw’. And she is regarded by Waugh as the true founder of Catholicism.

Waugh attracted controversy for citing ‘modesty’ as a desirable quality in women. Helena makes clear that, by modest, Waugh does not necessarily mean shy and retiring, or even meek. Like the novel itself, Helena has been unfairly sidelined. She may be over-literal at times –such as when she tests the healing powers of the cross by laying it alongside a dying woman- but novel and heroine alike boast a quiet, persuasive power that should not be overlooked.