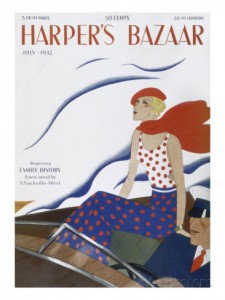 Many of Waugh’s early short stories were first published in Harper’s Bazaar magazine.

The diversity of Waugh’s early short stories is such that the Book Group found themselves disappearing down many an illuminating tangent last Saturday. It’s taken me all day, for example, to remember why we ended up finding out that Amy’s grandmother was a hand model for Cutex (we got there via a discussion about Waugh’s stories often first appearing in glossy magazines such as Bystander and Harper’s Bazaar), while a consideration of British life in what were then known as “the colonies” led to the interesting revelation that Ian’s elderly uncle returned from Kenya bemused by door handles (back home, there had always been someone to bow him out of a room).Even more astonishingly, we also found time to talk about the stories themselves.

The collection, we felt, divided itself into narratives which read as character studies or first attempts at longer stories and pieces that worked beautifully in their own right. One, in fact, was all three: some of us considered ‘The Man Who Liked Dickens’, which was revised to create the ending for A Handful of Dust, to be more successful as a stand-alone work than as a surreal departure from the much more realist novel that eventually contained it. 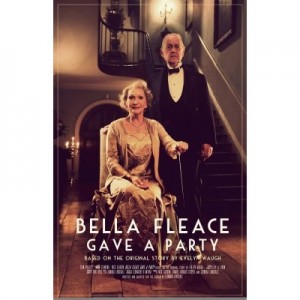 The crafting of stories like ‘Bella Fleace Gave a Party’ and ‘On Guard’ were seen as perfect examples of the short story form, ending on the sort of twist that made us wonder if Roald Dahl had read one or two shorter Waughs before producing Tales of the Unexpected. I can’t bear to give either ending away here, so do go and find out for yourselves!

And it’s not just a twist that can make a short story brilliant; the farcical but deft plotting of ‘Love in the Slump’, by which a happy ending is achieved by more than one fortuitous bit of timing, foreshadows the unexpectedly neat and satisfying dovetailing of Scoop’s many apparently disparate plot elements.

Even the most apparently shallow of offerings could show Waugh at his best, especially where dialogue is concerned. “Cruise” for example is made up of a superficial young woman’s postcards sent to friends from aboard the SS. Glory of Greece. She promises to send someone a postcard of the Sphinx, and her one-line response to this wonder of the ancient world made us laugh out loud:

This is the Sphinx. Goodness how sad.

In fact, one-or-two liners of polished brilliance are a distinguishing feature of many of these stories, including this very Wavian exchange from ‘Mr Loveday’s Little Outing’:

‘Think of being locked up in a looney bin all one’s life.’

‘He attempted to hang himself in the orangery,’ replied Lady Moping, ‘in front of the Chester-Martins.’

Many of Waugh’s signature preoccupations can been seen in these stories too. Rebecca in particular noticed how the English country house, or traditional way of life, appears under threat in most Waugh stories – most obviously in ‘An Englishman’s Home’, where rural nimbyism is treated with a wryness which makes you wonder if Waugh is parodying his own conservative attitudes. 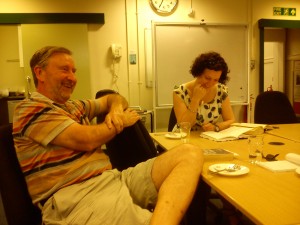 And then there’s the downright weird. Perhaps the oddest story in the collection is ‘Out of Depth’, in which a sinister magician sends two degenerate Bright Young Gentlemen into the past and the future respectively. In this uncharacteristic foray into science fiction, ‘Rip’ is sent into a dystopia where London has been colonised. He despairs of civilisation until he is taken to a Catholic service and the mass – ‘something that twenty-five centuries had not altered’ – brings him back to his true self. This story, not a classic by any means, encapsulates all that was most dearest to Waugh about his faith.

And finally, Book Group wouldn’t be Book Group without a little discussion of Waugh biography. Happily ‘Winner Takes All’, a tale of a younger brother always overshadowed by his inferior sibling,  fulfilled this need and led to a discussion of how Alec Waugh’s frankly mediocre offerings such as the Loom of Youth (search, search for the controversial bit – like trying to find a raisin in a bowl of smartprice muesli -) were always celebrated grandly by Waugh senior (a man who once welcomed Alec back for the school holidays with a handmade banner styling him ‘the heir’ of the family home).

We enjoyed Waugh’s shorter works so much that we have decided to steam full ahead and read his later offerings in this genre for our August book group. Do join us if you can.