Posted by Rebecca Moore in Waugh and Words on March 21, 2014

Evelyn Waugh is probably not the first person that comes to mind when you think of dictators of style. But he was not above picking apart the trends of his time – in particular the fashion for nostalgia. In his article ‘Let Us Return to the Nineties: But Not to Oscar Wilde’ originally published in November 1930’s issue of Harper’s Bazaar, Waugh despairs at the revivalist movement for the fin de siècle. What is particularly interesting is his reading of fashion as suffering the same nostalgia:

Any period acquires a certain glamour after twenty-five years or so. Among simple minds the clothes of even a few years back excite derisive glee in theatre or cinematograph; to the more sophisticated the aesthetic and social codes of another generation are always instructive; but whereas almost any other period requires an acquaintance with Art and History far beyond the capacity of the young women who most eagerly follow the fashion, the Nineties, or rather the fiction that has come to represent the Nineties to the present generation, requires for its appreciation and imitation no sort of endowment of intellect or culture.

It is a harsh judgement to suggest that women who follow fashion have no interest in antiquity, and that nostalgia for the recent past demonstrates a lack of intellect, but his comment about the ‘fiction’ that has come to represent this recent past is very interesting. 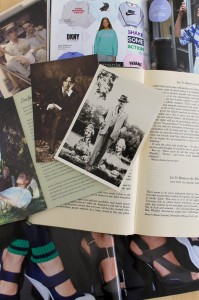 Bring Waugh’s criticism almost a century into the future and we find style is once again overwhelmingly dominated by the recent past – the nineteen-nineties. Flick through any women’s fashion magazine; Elle, Vogue, Grazia, Marie Claire, Harper’s Bazaar, and you will find bright patterns, gaudy sportswear, crop tops, sweaters with enormous logos, grungy tartan and distressed denim. The 1990s are most certainly having a style moment. I am old enough to remember that decade and I don’t recall it looking quite like this, it was far less polished, less self-consciously kitsch. Perhaps this is what Waugh is insinuating with his idea of the ‘fiction’ of a decade. In ‘Let Us Return to the Nineties’ he picks things worth saving from the 1890s that could not be further from the image of Oscar Wilde reclining in a silk dressing gown. He lists ‘the cult of the safety bicycle – boon to postmen and University dons,’ W.G. Grace, Rudyard Kipling and General Kitchener. It is an amusing juxtaposition and knowing Waugh’s propensity for satire one can never be quite sure if he was serious in his assertion that ‘instead of sprawling about on divans, burning cheap joss sticks (or expensive ones for that matter) and fanning themselves with peacock’s feathers, I should like to see fashionable society pedalling out among the motor-cars for picnic lunches on Epping Common or Hampstead Heath.’ But fashion, like most things, is cyclical, and in an ironic twist Waugh came to indirectly influence nostalgic style for the 1920s with the Granada television adaptation of his novel Brideshead Revisited which was first broadcast in 1981. Derek Granger, the producer of the series, noted that quite suddenly ‘shop windows were filled with Brideshead fashion, there were Brideshead fancy dress parties and teddy bears acquired a new iconic status.’

What is important to take from ‘Let Us Return to the Nineties’ then, is the idea that nostalgia for the most romantic and the most aesthetically pleasing elements of an era is not necessarily an honest appreciation of it. I can’t help but wonder what Waugh would have chosen as worth saving from the 1990s, though I imagine witnessing the development of the mobile phone would have caused him unspeakable horror.

6 responses to “A Certain Glamour: Evelyn Waugh and Nostalgic Fashion”