Me, a leader? My experiences of the Aurora programme

Last September I decided to apply for the Aurora leadership programme for women in higher education. This isn’t the sort of thing I would usually do – I’ve never really thought of myself as a ‘leader’. But having reached the level of senior lecturer I was starting to take on roles such as leading research teams, and having to consider leadership issues. The Aurora programme appealed to me because it was targeted at earlier career women who were not in substantive leadership roles, and who hadn’t had leadership training. It all sounded very positive and unthreatening!

It’s well-recognised that there are problems with gender equality in academia. Women enter academia at the same rate as men – around 48% of research postgraduates are female – but women are less likely to progress to more senior positions – only around 20% of professorial posts in the UK are filled by women. These statistics only worsen if we just look at science subjects. This has been dubbed the ‘leaky pipeline’ effect.

As recent controversies show, negative attitudes about women in academia still persist – although the humorous yet vocal response from female scientists suggests a widespread desire to challenge such stereotypes. But women still face institutional barriers, and in the UK we are far behind countries such as Sweden in fostering gender equality in childcare and family responsibilities.

We also know that women struggle to see themselves as future leaders. The ‘leaky pipeline’ means there’s a lack of senior women to act as role models. We just don’t see enough senior women in academia to inspire us to feel that we can make it to the top. Women can lack confidence to champion their own careers: research suggests that women often suffer from ‘impostor syndrome’ (believing that they are not good enough for their job), and that women are much less likely than men to make speculative job applications or put themselves forward for promotion, unless they are sure that they meet or exceed all the criteria.

The Aurora programme, led by the excellent Ginnie Willis, is on a mission to tackle these problems. Its primary goals are: to empower women to think of themselves as leaders; to equip them with the skills and confidence to move on in their careers and instigate change in their institutions; and to help build networks and relationships that will support women’s career development. All this is being done at a scale that gives it a real chance of making a difference – this year five regional cohorts involve over 800 women in total; next year they hope to include over 1000 women. The programme uses a combination of learning sessions, an action learning set, and self-study resources. 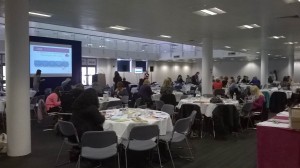 For me, taking part in the Aurora programme has been a very positive experience. It’s been great to meet other women at a similar stage in their career, and to be able to spend time talking about our experiences and sharing support and advice. I’ve enjoyed the learning sessions, particularly the talks from inspirational senior women. Ex-BBC presenter and academic Marie Kinsey’s description of her career in journalism – which started when she decided as a teenager to drop in unannounced on the editor of the local paper – really made me recognise how important it is not to be held back by a lack of confidence. Just get on and do it! In the final learning session we heard from Paralympic athlete and member of the House of Lords Tanni Grey-Thompson, who was hugely inspiring. Her description of the thousands of hours of training she undertook as an athlete brought home to me the role of hard work and preparation in success.

Alongside the learning events, every woman on the Aurora programme is linked with a more senior woman in her institution who acts as a mentor, and this has been one of the best aspects of the programme for me. My mentor has been very generous with her time – I’ve really enjoyed hearing about her career and her tips for managing a senior role, and she’s helped me think in a much more strategic way about planning for the future.

Taking part in the Aurora programme has helped me to develop a different perspective on myself and my career. I’m much less embarrassed about speaking up about my areas of expertise and my successes. I do feel inspired and empowered to aim higher, which I guess is exactly what the programme seeks to achieve. I even throw the occasional ‘power pose’!

While the training benefits the individual women who attend, it’s also part of a bigger picture – the graduate ‘Aurorans’ are expected to go on to work with their home institution to share learning and promote women’s leadership. It’s a great time to be doing this at Leicester, as part of wider work locally around gender equality including the University of Leicester’s commitment to the HeforShe initiative.

The Aurora scheme is currently scheduled to run for three more years. It would be great to see it continue in the future, but it would be even better if structures for supporting and promoting gender equality became embedded in our universities, making a national programme redundant. In the meantime I’ll be proudly wearing my Aurora badge and encouraging other women to know their strengths too.