This is a public workshop and all are welcome to attend. 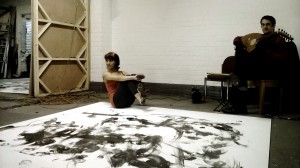 This event is sponsored by the Department of Media and Communication and the College of Social Science at the University of Leicester.

The workshop aims to bring together artists and academics to explore artistic interventions in debates about citizenship and belonging. While there is growing recognition that the classic view of citizenship is inadequate to articulate contemporary forms of civic engagement and collective belonging, little attention has been paid to (1) to the ways in which artistic practices may reinvent citizenship as a political project and (2) to the ways in which artists can perform acts of citizenship in public life.  What are artistic visions of citizenship? Can these produce different views of state/citizen relations and new collective imaginaries? How do artists imagine ‘communities of belonging’ beyond the nation? Can artists create new communicative spaces for contesting established notions of citizenship?  Do performance events have the power to counteract those dominant meanings and exclusionary practices of citizenship that become embodied in institutional policies and practices?

Dr Nick Stevenson – ‘Raymond Williams and the Politics of the Commons: Questions of Art and Enclosure’ (Sociology, University of Nottingham, UK) 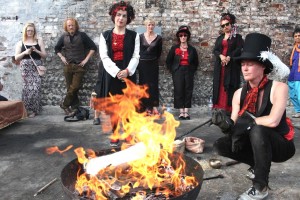 Alinah Azadeh is a British artist working internationally across installation, sculpture, performance, the digital and writing. Often involving the public in acts of gift, exchange and ritual, her works create dialogue around the nature of our social and personal identities.

Commissions have included The Gifts (2010), Bristol Museum and Art Gallery,   Portraits of the Unseen (2010), National Portrait Gallery, Child’s Play (2014), Asia Triennial Manchester/ Imperial War Museum North, All is not Lost (2014), Museum of Picardy, France and two works for The Beginnings of That Freedome  currently at Westminster Hall as part of the Parliament in the Making programme.

Her touring project, Burning the Books, supported by Arts Council England, is a collaborative performance work centred around a collectively written, recited and burned Book of Debts and offering the public a deeply human look at the thorny subject of debt and its impact on the individual and society.

Ayse Balko is a Turkish artist/photographer/show reel producer based at Balko Studio in Sheffield. She holds a BSc in Chemical Engineering and a Masters in Business Administration. Her career has evolved from being a chemical engineer / unit manager, to street/night club/circus entertainer/performer, conceptual live art producer/performer, photographer, painter, and show reel film maker. Her work is driven by the concepts of empowerment & movement.

Alison Jeffers is a full-time lecturer and researcher in Drama at the University of Manchester. She began her academic career as a PhD researcher on the In Place of War research project in Manchester (2004-2008) which was set up to investigate relationships between war, conflict, theatre and performance. Alison’s research involved looking at theatre and performance practices made about and by refugees and asylum seekers in the UK.  Her professional background is in community arts and applied theatre and she is currently researching the British community arts movement of the 1970s.

How do I write about myself?

I could start by saying that my name is Rita Marcalo, but even that is not true. I was originally given the Portuguese name Rita Marçalo but there is no ‘ç’ on British keyboards, so when I came to live in the UK by default I became Marcalo. And even that was a mistake: my grandparents’ family name was Marçal, but they were not very literate people and so did not notice when the registry office added an extra ‘o’ at the end of my dad’s name. So my dad, by default, became Marçalo.

Today I understand myself as an un-performer who utilises dance as a metaphor to create meta-choreographic work based on the idea of the encounter.

But really, all I am interested in is in solving problems creatively.

I am a cultural sociologist with particular interests on cultural events and institutions. I am currently at Goldsmiths, University of London, where I am a Lecturer in the Department of Sociology as well as a member of its interdisciplinary Centre for Urban and Community Research (CUCR). My PhD research involved a case study of the European Capital of Culture programme and its role within EU cultural policies as a means of identity-building. In more recent years I have been involved on an collaborative project titled ‘Art Festivals and the European Public Culture’, which examined the role of festivals as sites of trans-national identifications and democratic debate. I was the researcher responsible for mixed-arts urban festivals, with case studies including the Brighton Festival and the Venice Biennale among others. This inspired me to continue researching biennials in particular, expanding beyond my focus on Europe to examine the emerging, widespread ‘biennalization’ of the contemporary art world. My publications include Becoming Europeans. Cultural Identity and Cultural Policies (Palgrave, 2009) and Festivals and the Cultural Public Sphere (co-edited with L. Giorgi and G. Delanty, Routledge, 2011).

Independent filmmaker João Paulo Simões is the grandson of Angolan poet Maurício de Almeida Gomes. His work is defined by challenging, character-driven content, the support of worthwhile causes and encompasses fiction, music videos and commissioned documentaries. He runs Frontier Media in the UK and Cinema Livre in Portugal.

Dr Nick Stevenson is currently a Reader in Cultural Sociology at the University of Nottingham. He is currently writing a book called Human Rights and the Future of Freedom for Routledge. In the past he has published books on Freedom (2012, Routledge), Education and Cultural Citizenship (2011, Sage), David Bowie (2006, Polity Press), Cultural Citizenship (2003, Open University Press), Culture and Citizenship (2002, Sage), The Transformation of the Media (Longman, 1999), Understanding Media Cultures (Sage, 1995, 2002) and Culture, Ideology and Socialism (1995, Ashgate).