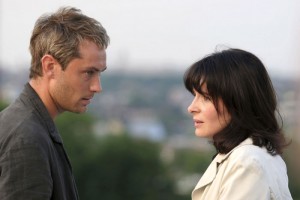 This is a short commentary that I have written for the workshop ‘Bordering Strangeness’ organized by Chris Rumford (Politics and IR), Agnes Woolley (English), and Elizabeth Alexander (Geography) all based at Royal Holloway – University of London. The workshop intends to explore the use of film as text which can (potentially) offer fresh perspectives on the imbrication of bordering processes and representations of the stranger. The event is to be held at Somerset House in London on April 2, 2015 and is sponsored by the Security and Sustainability research group at Royal Holloway, University of London.

Anthony Minghella’s last feature film Breaking and Entering (2006) is a film that opens up new possibilities for imagining how new intimate relationships and relations of co-existence between outsiders and insiders can be constituted through everyday encounters and transgressions of physical borders (e.g., alarmed doors, fences, specific markers of difference in the space of the city), which are inscribed in the landscape of the city. In the film, the border is visually manifested as an external wall that seeks to keep intruders or unwanted observers at bay, making visible prevailing social aesthetics while rendering invisible socially or ethically or legally unacceptable practices. The border divides off public and private, but it also shapes and orders relation and communication, engagement and exchange. Physical borders, which are made visible through particular arrangements of mise-en-scene and point-of-view (e.g., Bosnian refugees, Amira and Miro, are accorded a strong point-of-view), also mark and express symbolic differences between “safe” and “dangerous” areas of the city and, ultimately, the social and cultural differences separating insiders (white, middle-class creative professionals, citizens) and outsiders (cleaners, refugees, immigrants).

In Breaking and Entering border transgressions are translated into acts of intrusion, breaking into private property, stealing, deceit and infidelity. They take place in the lived experiences and intimate lives of the characters and disrupt those entrenched social and cultural relationships that position the stranger (the refugee, the immigrant) as an outsider and a security threat to the nation. Yet, the film also suggests that border transgressions are transformative and redemptive to the extent in which they open up the possibility of new ways of co-existence underpinned by universally shared values of compassion, hospitality and forgiveness cutting across ethnic and class divides. As the title of the film suggests, characters by ‘entering and breaking’, both literally and metaphorically, into the intimate lives of strangers are given the chance to imagine what is it like to be in the place of the ‘other’ and embody his or her condition of strangeness – the teenager Miro breaks into Will and Sandy’s office for a burglary, Will intrudes into Amira’s life in search for love, Sandy begins a relationship with the Black cleaner at the office, Oana, an Eastern European prostitute, forces herself on Will’s car to seek shelter from the cold and ends up befriending Will. In the film clip I have chosen to discuss, Will’s dream of a hospitable, gentrified and green London, epitomized by the virtual-reality video clip made by Green Effect (Will and Sandy’s landscape architecture business) for the promotion of their winning design proposal for the redevelopment of King’s Cross, is undermined by the lived predicaments of King’s Cross as an area of poverty, crime and urban decay. Will bears witness to such predicaments through his experience of the burglaries to Green Effect, which has relocated its office to a warehouse in King’s Cross. If the clip alludes, on the one hand, to the impossibility of transforming the urban landscape and erasing those entrenched markers of difference that project danger onto the figure of the stranger (the refugee, the immigrant), on the other, the burglaries set into motion a series of events that pull Will into the lives and spaces inhabited by Bosnian refugees, Amira, and her teenage son, Miro. In the clip, it becomes apparent that in his last burglary Miro left behind a CD containing a copy of intimate videos and photos of Will’s family life, which he had found stored on Will’s stolen laptop. Intrigued by the thief’s behaviour, Will decides to keep watch from his car at night and eventually follows Miro. In the end, Miro’s act of kindness and compassion invites understanding and sympathy not only from Will, but also from audiences who are given the chance to position themselves in the place of the stranger.

One response to “The Lives of Others”