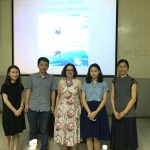 My visit to the Guangzhou Academy of Fine Arts

Posted by Janet Marstine in School of Museum Studies Blog on September 30, 2015

Whilst doing research in September in Hong Kong and Guangdong, I had the good fortune to visit the Guangzhou Academy of Fine Arts (GAFA), an institution of 5000 emerging artists from which a good number of our students come. Whilst there I met the Director of the GAFA Art Museum, Professor Hu Bin, who told […] 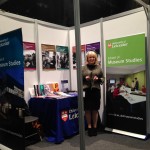 The School of Museum Studies at the Museums Association Conference 2014

Posted by Robin Clarke in School of Museum Studies Blog on October 20, 2014

Posted on behalf of School Manager, Barbara Lloyd: Call me a sentimental old fool if you will, but I was quite sad to be attending my last ever Museums Association conference on the 9th and 10th October in the lovely, if wet, Cardiff. We have been attending the exhibition alongside the conference for many years […]

Posted by Sandra Dudley in School of Museum Studies Blog on October 28, 2013

Excitingly, a new journal appeared in the world of museum studies this summer. Museum Worlds: Advances in Research is a new annual journal, published by Berghahn, co-edited by the University of Leicester’s Sandra Dudley and the Australian National University’s (ANU) Kylie Message and with Jack Lohman (Director of the Royal British Columbia Museum) and Howard […] 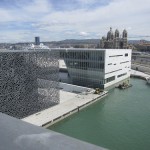 The French experiment of MuCEM

Posted by Janet Marstine in School of Museum Studies Blog on July 30, 2013

On my summer holidays I had the good fortune to visit the fabulous new French national museum in Marseille, MuCEM, an acronym for the Musée des Civilisations de l’Europe et de la Méditerranée. Opened in June of 2013 as a key initiative of Marseille’s designation as a European Capital of Culture, MuCEM explores the complex […]

Posted by Janet Marstine in School of Museum Studies Blog on June 5, 2013

On 22 May at the American Alliance of Museums (AAM) conference in Baltimore I attended an unforgettable session commemorating twenty years since artist Fred Wilson’s precedent-setting intervention Mining the Museum at the Maryland Historical Society. Wilson’s 1993 exhibition critiqued museums’ traditional silences around issues of race by juxtaposing celebrated objects representing narratives of wealth and […]