The French experiment of MuCEM

Posted by Janet Marstine in School of Museum Studies Blog on July 30, 2013 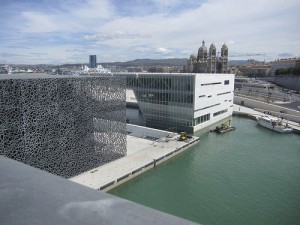 On my summer holidays I had the good fortune to visit the fabulous new French national museum in Marseille, MuCEM, an acronym for the Musée des Civilisations de l’Europe et de la Méditerranée. Opened in June of 2013 as a key initiative of Marseille’s designation as a European Capital of Culture, MuCEM explores the complex hybridity of culture, past and present, in the Mediterranean basin.

The architecture of the museum is breathtaking. Designed by Rudi Riccioti, MuCEM was built along the harbour on reclaimed land which incorporates a 17th century fort and a port terminal. Dramatic footbridges suspended high above the sea take the visitor from the old port to the MuCEM campus with its panoramic views of the bay and the city and from one museum building to another. Twists and turns in MuCEM’s elaborate maze of walls, courtyards and latticework embellishments offer an astonishing variety of perspectives which, in turn, set a tone for the exhibitions and programs developed by the museum in conjunction with partner organisations across Europe and North Africa. Inside MuCEM is an ambitious melange of permanent collection displays, special exhibitions, performances, programmes and a screening area, called La Médinathèque, which encapsulates the international breadth of the organisation.

MuCEM is clearly an attempt to decentralise French cultural power and resources, historically concentrated in Paris. It is also a vehicle to grapple with the post-colonial realities of contemporary France through dialogical, socially engaged practices. Will this conceptual shift empower stakeholders long disenfranchised from French museum culture by issues of race, class, religion and ethnicity? Clearly, as the experiment that is MuCEM develops, museum practitioners and museum studies researchers can glean much from its trajectory.

Janet is the Academic Director for the School of Museum Studies.