Climbing Mount Sharp: From Warm and Wet to Cold and Dry.

Posted by jbridges in Mars Science Laboratory Blog on July 1, 2020 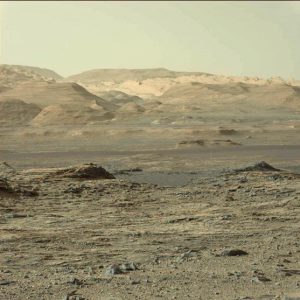 Climbing Mt. Sharp from ancient lake deposits at the the base, to more desiccated, sulphate-rich deposits higher up the mountain.

Mars Science Laboratory is entering a new extended mission phase and about to start addressing a key part of the MSL original scientific aims.  Gale Crater was chosen as a landing site for the Curiosity Rover because it has preserved a unique record of the transition from ‘Warm and Wet’ in Ancient Mars about 4 Gy ago to today’s cold and dry conditions. We have found evidence for the ancient climate in the form of muds laid down in a lake that once filled the crater and clays, iron oxides that formed as the lake deposits were buried and heated.  Similar conditions were probably present over much of the ancient highlands of Mars.

However, around 3.8 Gyr a major change took place on Mars.  For reasons that are not yet fully understood the thick CO2 atmosphere that allowed stable bodies of water to exist on the surface was lost, and today there is only 6.5 mbar of CO2 atmospheric pressure.  As we drive up Mt. Sharp – the central 5.5 km high mountain in Gale Crater – the clay-rich terrains will start to change to sulphate-rich outcrops. This is predicted by Near InfraRed spectroscopy from orbit. We are about to enter a gorge on the side of Mt. Sharp called Geddes Vallis which Curiosity will drive up in the Extended Mission to find out how and why the climate made its dramatic change.  Some of the questions we will address with our instruments and drill are how long did the climate change take place over – a short dramatic event or over a more protracted era for hundreds of millions of years? Did the Gale Lake dry up entirely straight away or were there diminishing episodes of lake and river activity?

As the year progresses I will write blog pieces about the progress of the Curiosity Rover into and up Geddes Vallis, the launch of Mars2020, progress in the ExoMars rover’s development and about the largest Mars science project of all – Mars Sample Return. The Physics and Astronomy web pages will also have a podcast about how we drive a rover on Mars based on my 8 years of rover operations experience.