Software Glitch on Curiosity Whilst We Prepare in Leicester for Selection of Landing Sites for Next Generation of Landers. Sol 2201. 15th October 2018

Posted by jbridges in Mars Science Laboratory Blog on October 15, 2018

We have been having some software problems on the Curiosity Rover.  Switching between different mirrored parts of the software is helping to diagnose the problem and now that the main dust storm on Mars has subsided we expect to be back to normal operations soon.  I am on science operations duty on Wednesday when we hope to have a skeleton science plan and Curiosity up and running for another 6 years at least.  Sadly the NASA Opportunity Rover which has been operating since 2004 is still not responding but it may yet respond once more dust has blown off its solar panels.

Partly as a result of the success of MSL and Opportunity a new generation of rovers are now reaching advanced stages of planning.  The NASA Mars2020 mission will be selecting its landing site in the next few days and ExoMars landing site selection will take place at the National Space Centre in Leicester on November 8-9th.  There will be 100 attendees from the ExoMars engineering, instrument and science teams and we will consider the range of engineering constraints – slopes, sand dunes, elevation – and chances of finding traces of ancient life between Oxia Planum and Mawrth Vallis. These are two clay-bearing sites near the equator and they show the key challenge of choosing a landing site effectively.  Mawrth Vallis has more diverse clay types and can be considered an iconic Mars site as it was one of the first areas on Mars to have clay identified from orbit by the European Mars Express orbiter. However Mawrth is at higher elevation and has more sand dunes, slopes and unwanted capping unit. Oxia Planum has features which suggest it is largely covered by mudstones which may have trapped organic molecules, is at lower elevation and has fewer obstacles.  I expect that choosing which of the two sites to recommend will involve vigorous scientific debate. 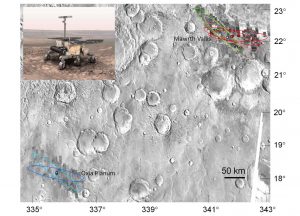