Posted by jbridges in Mars Science Laboratory Blog on August 5, 2017

The 5th August marks  5 Earth years since the successful landing of Mars Science Laboratory.  During the landing I was at the Jet Propulsion Laboratory in Pasadena.  We were all nervous but the signals for successful atmospheric entry, parachute deployment, Skycrane operation and then landing all came through.   The first image of Mt Sharp came back via Mars Odyssey and the mission was on its way. Looking at our map – updated daily during operations – you can see that we have driven over 17 km, most of the time we have been driving – at up to 80-100 m day though usually less – past the Bagnold Dunes.  We have now cut through them are on Mt Sharp itself. (more formally known as Aeolis Mons).  Some of the key science targets are approaching in the next year or so of operations, we are just below the Vera Rubin Ridge now and once that science campaign is completed we will drive on to the main clay-rich unit.  The list of discoveries is long and growing: unexpected types of fractionated igneous rocks (the Leicester-led and Open University UK Participating Scientist team has a new paper in press about them), methane, organics, K-Ar dating, ancient groundwater in the mudstones laid down in a large lake that once filled much of Gale Crater, and so on.

As Mars moves out of Solar Conjunction next week we will recommence our operations work on Mars – here is hoping for another 5 years of discoveries with the Curiosity Rover! 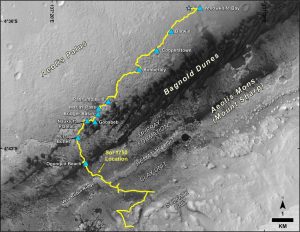 You can find more classic images and comment on MSL here:

and in my older blog posts (starting with the days leading up to landing)  archived here: