One down… seven to go 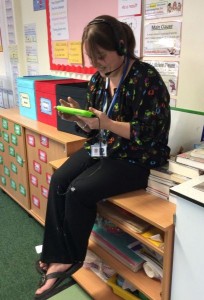 Things are charging ahead here in the Law in Children’s Lives project. Just to recap, last autumn we worked with children, experts and games company Enigma to design and build our tablet game ‘Adventures with Lex’. The game is a fun way (alien included) to find out what children understand about the Law. In March, we tested the beta version of the game with the children in our pilot study schools, and also with our much more grown-up advisory board. Between us all we found a few glitches and issues, which Enigma fixed ready for our first ‘proper’ school visit.

Last Tuesday was the big day. We hauled several boxes of tablets, headsets, and assorted bits and bobs into Barley Croft Primary School in Leicester, and spent the next two days working with the children in years four and five. We were delighted by the support that the school gave to the project – everyone from the head, to the teachers and other staff, to the children, to the parents, joined in with great enthusiasm.

I personally was especially impressed with the support given to the children from the Language Support Unit. From the beginning, we have been determined to make the project as accessible as possible, so it was great to see the staff member sitting with the children from the unit and making sure they understood what they were doing, whilst they got on with completing the game for themselves.

As well as the support from the schools, one thing that is turning out to be essential to the smooth running of the sessions is ensuring that everyone has something to do. This is easier said than done when some children finish the game in half the time it takes their friends. When we start the session, every child in the class is plugged into a tablet and headset, but gradually more and more children’s hands go up as they get to the end of the game. Then members of the project team, and the school staff, start whizzing around the class to hand out evaluation forms, collect the tablets, and then hand out more activity sheets to the children who have finished. It feels busy, but it’s great fun, and everyone seemed to be having a good time.

Of course, as well as the sessions in school going well, the most important thing for us is to find out what the children think about the law. The results we’ve seen so far have been fascinating, but we can’t tell you about this until we get to the end of the school visits, as we don’t want to influence those visits that are still to come. So, one visit down, seven to go, and by the start of the summer holidays we’ll be finished, and will be able to start revealing some of our findings. Like the classroom sessions themselves, the next couple of months are going to be busy, but fun.