Hanif Kureishi: the Assemblage of a Native Informant

Posted by Alberto Fernández Carbajal in Queering Islam on March 6, 2015

There are few writers alive in Britain today who can elicit such polarised, or at best highly qualified, responses as Hanif Kureishi (except, perhaps, his fellow writer and friend Salman Rushdie). When I attended an event on Muslim writing last year, I was surprised by the critical tone that some Muslim cultural practitioners took on prominent British and Muslim writers such as Kureishi and Rushdie. In their eyes, they had ‘sold out’; they didn’t write about the things that mattered to most British Muslims nowadays; they — and this was their severest accusation — were seen as part of ‘the Establishment’. I have to admit my mind boggled at such accusations, and I suspected an element of jealousy lingered in such comments, although they did make me wonder about issues of class.

Although Kureishi — perhaps less so Rushdie — is often at ease writing about working class characters, his middle-class background puts him in a relatively safe position of economic privilege. Nonetheless, as I cast my eye back to the protagonists of Kureishi’s and Rushdie’s early fiction and screenplays, the ones that first garnered them both the attention of the international public eye, I found no mainstream characters, and no unqualified kowtowing to dominant ideologies. Protagonists such as Omar, in My Beautiful Laundrette (dir. Stephen Frears, 1985) and his novelistic successor in The Buddha of Suburbia (1990), Karim Amir, are anything but mainstream characters, and they certainly carved a space for alternative ethnic, and queer, subject positions in contemporary British culture, with important links to a Muslim community that wasn’t either victimised or portrayed as a paragon of virtue. 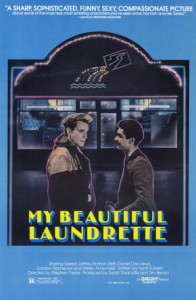 As I research My Beautiful Laundrette (theatrical poster pictured above) 30 years after its original release, I’m surprised by how fresh the film still is and by how easily it can yet tickle its audience through its use of satire. Omar (played by Gordon Warnecke) is a young British Asian man in conservative and economically starved 1980s London. His father (Roshan Seth, playing a far more sombre character than his ebullient Haroon in the 1993 BBC adaptation of The Buddha of Suburbia) is a disaffected Pakistani socialist who hasn’t been able to make it in British journalism due to ethnic bias, and who’s taken to alcohol after the death of his white British wife Mary. It is assumed — much more so in the screenplay than in the film itself — that she was driven to suicide by her husband’s struggle to come to terms with British taboos regarding interracial relationships. Under instructions from his father, Omar, shy but alert, is taken under the wing of his enterprising uncle Nasser (Saeed Jaffrey), who gets him a job in his garage under the informal supervision of his son Salim (Derrick Blanche), and which enables renewed social interaction with his rebellious cousin Tania (Rita Wolf).

Central to the film is the parallel relationship of Nasser with his mistress Rachel (Shirley Anne Field) and of Omar with his old schoolmate and former National Front supporter Johnny (Daniel Day-Lewis, who showed his chameleonic acting qualities by featuring in Merchant and Ivory’s A Room with a View in the same year, where he played the stilted upper-middle-class snob Cecil Vyse). Ambitious Omar convinces his uncle Nasser to let him take over his dwindling laundrette called Churchill’s, whose name playfully denotes a bygone era in British history. This venture, involving a thorough refurbishment turning the almost derelict space into a brightly-coloured, neon-lit, almost surreal establishment, is partly funded by the money coopted from Salim’s illicit drug dealing. The combination of drug dealing, ruthless entrepreneurship, alcohol consumption, adultery, sexualised behaviour, interracialism, and the general black humour with which Kureishi tackles a British Asian family, makes it easy to understand why the film dissatisfied members of the British Muslim community. (Ironically, the film, on the other hand, was well received by the liberal Left, the very political sector that Kureishi’s work often lampoons.) Mahmood Jamal famously derided the film for portraying Muslims as ‘money-grabbing, sex-crazed people’.

Considering the worldwide attention the film received and how talismanic it became as a representation of British Muslim identities, it’s understandable that some Muslims felt betrayed by the film’s irreverence. Nonetheless, at heart, this is a problem with what several critics call the ‘burden of representation’ placed on minority artists. In other words, when you’re a member of an ethnic minority, such as the South Asian community in Britain, and you catch the eye of the mainstream, it’s assumed you’ll use your power of representation to create positive images of your cultural community. This is precisely what Kureishi’s screenplay refuses to do, and perhaps one of the reasons why My Beautiful Laundrette remains such a scathing yet vivacious piece of filmmaking: characters aren’t, and please pardon the easy pun, ‘black’ or ‘white’; they have to make each other out; they have conflicting personal and professional agendas. In other words, Kureishi doesn’t present us either with a vicious or with a virtuous cultural community, but chooses instead nuance of character and moral complexity, even prizing implausibility over critical complacency. The two central characters in the film, Omar and Johnny, have to learn to trust each other, after Johnny’s stint with the National Front — which allegedly broke Omar’s father’s heart — and after Omar’s opportunistic embrace of Thatcherite entrepreneurship and his acceptance of heteronormative and monocultural familial expectations (embodied in his intended marriage to his cousin Tania, sanctioned by his uncle Nasser and his father Hussein).

Reading and viewing Kureishi’s work, indeed, requires a lack of complacency: there are no consistent political stances here, nor fully representative depictions of any cultural grouping. This is why the familiar postcolonial concept of ‘hybridity’ seems to slide off Kureishi’s back. Envisaging Kureishi as a ‘hybrid’, syncretic artist seems to entail a blending of British and Asian identities that is uniform or balanced. In his case, this image is far from apt. He is primarily, and self-confessedly, a British writer; he also happens to be of mixed South Asian and white British heritage, and this gives him familial views onto the white British, British Asian and Pakistani communities. His work is therefore peopled by characters who are embodiments of cultural and ideological contradictions, of inexorable slippages, and as such both artist and oeuvre are more fitted to the Deleuze-and-Guattarian image of the ‘assemblage’: a simultaneous overlapping of various identities that are neither fully assimilated nor cohesive. It is perhaps because of this lack of cohesion, and because of the anxieties surrounding the burden of representation — of having to constantly justify what one writes about and for whom one speaks –, that Kureishi’s work seems preternaturally concerned with the theme of disorientation: he writes about adolescents and youths lost in the multicultural metropolis, about characters cast away from failed relationships, or adrift in middle- and old age. There is much not to like in some of Kureishi’s characters, and his tone may be sometimes too morbidly bleak and petulant, yet it’s one of our most prominent instances of just how queer diasporic experiences can be, of how necessary queer bodies are in order to start ‘queering’ our shared spaces, making readers and viewers question the ideological biases of their own cultural positions whilst querying artistic form and social expectation.

Alberto is a Leverhulme Fellow at School of English, University of Leicester, where he previously was Teaching Fellow in Postcolonial Literature. He's currently working on a Leverhulme-funded project entitled Queer Diasporas: Islam, Homosexuality and a Micropolitics of Dissent, dealing with representations of queer Muslims in international fiction and film. His research interests include queer, colonial and postcolonial literatures and modernist, cosmopolitan and black British writing. His monograph Compromise and Resistance in Postcolonial Writing: E. M. Forster's Legacy was published by Palgrave Macmillan in early 2014. He is consultant for ARIEL: A Review of International English Literature. His work has been published in ARIEL and in the Journal of Commonwealth Literature.