Posted by Alberto Fernández Carbajal in Queering Islam on November 25, 2014

Lately, I have been reading the work of Timothy Fitzgerald (University of Stirling, UK), a leading scholar of religion, particularly his thought-provoking book Discourse on Civility and Barbarity: A Critical History of Religion and Related Categories (Oxford University Press, 2007), pictured below. 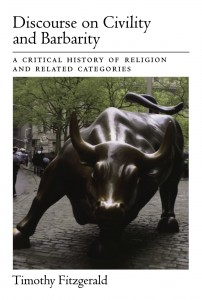 In this book, Fitzgerald argues that the western world (i.e. Europe and America) has created the category of ‘religion’ as we understand it nowadays in the wake of the European Enlightenment. One of his main arguments (and a provocative and interesting one it is!) is that in our so-called ‘secular’ world, which he doesn’t believe to be totally secular, the category of ‘religion’ has become authorised and contained by the secular world of ‘politics’. In this sense, religion has lost its authority, and most western countries have tended to agree that religion should belong in the realm of the private and that secularism should belong to the realm of the public, with no political exchange between them.

This is the main commonly-held idea that his book starts deconstructing most persuasively. The author argues that the way the western world sees the apogee of secularism as the most developed ‘natural’ phase of humanity is in fact a rhetorical construct, and that the restricting concept of ‘religion’ which we now hold doesn’t allow the different aspects of religiosity to enter with legitimacy the realm of public life, which it has always inhabited. In other words, Fitzgerald doesn’t see religion and politics as mutually exclusive, and religion shouldn’t be constructed ‘naturally’ as an individual’s ‘mere’ relationship with a ‘deity’ (a category that he also questions).

In a moment of particular lucidity, Fitzgerald sees the rituals of ‘secular’ states, the sacredness of ‘democracy’ and ‘human rights’ for instance, as not that different from the ritualistic world of ‘religions’. Indeed, it seems even the realm of the secular is steeped in belief and in collective investments in sacred ideas. In light of Fitzgerald’s work, Islam doesn’t need to be predicated as ‘merely’ a religion, or as a ‘political ideology’ dangerously infused by religion, for, in his view, the two categories aren’t really exclusive, and Islam could be seen more accurately as a way of life encompassing belief, ideology and politics.

This study is really useful to start challenging the West’s continued perception of religion and politics as impermeable and/or hermetic, and also the assumption that the West is coherently secular, objective, and that its model of rationalism is but the most universal and natural way for the ‘modern man’ to be. The author’s incisive critique of the relegation of ‘religion’ to the margins of political life allows us to look at Islam as a way of life that transcends such self-contained categories, and to perhaps allow issues of faith and morality to reenter the public realm.

Alberto is a Leverhulme Fellow at School of English, University of Leicester, where he previously was Teaching Fellow in Postcolonial Literature. He's currently working on a Leverhulme-funded project entitled Queer Diasporas: Islam, Homosexuality and a Micropolitics of Dissent, dealing with representations of queer Muslims in international fiction and film. His research interests include queer, colonial and postcolonial literatures and modernist, cosmopolitan and black British writing. His monograph Compromise and Resistance in Postcolonial Writing: E. M. Forster's Legacy was published by Palgrave Macmillan in early 2014. He is consultant for ARIEL: A Review of International English Literature. His work has been published in ARIEL and in the Journal of Commonwealth Literature.