Donald Trump – Museums in the face of hate

Posted by Robin Clarke in School of Museum Studies Blog on January 30, 2017

A couple of weeks ago on Friday was one of the happiest days in our School calendar: Graduation Day. We love greeting our students and families, dressed up to the nines, complete with gowns and mortar boards, in readiness to be presented with their degrees, for which they have worked so hard. It is a day of great enthusiasm, optimism and happiness.

The same day they proudly walked across the stage to receive their certificates, another man was walking towards a podium with rather more sinister intentions. On the other side of the Atlantic, Donald Trump was being inaugurated as President of the United States of America. He became the most powerful man in the world. 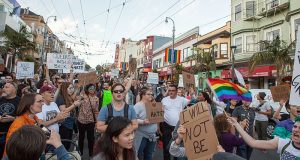 Let’s remind ourselves why this is sinister and worrying…let’s start by remembering how he supports discrimination of Trans people by supporting North Carolina’s appalling anti-Trans HB2 (Bathroom Bill) law, or how he openly mocks people with disabilities. We might think about how he is happy to remove healthcare from millions of vulnerable people, how information about LGBT Rights and climate change disappeared from the Whitehouse website within moments of his inauguration to be replaced with Trump’s ‘America First’ agenda. We might think about the way in which he happily describes Mexican immigrants as rapists, drug dealers, bad hombres. And let’s not forget about his attitude towards women and his boasts of sexual assault.

This weekend, of course, he has pursued his presidential crusade further with his executive order that sought to ban refugees and people from his seven listed countries from entering the United States, and ordered immigration officials to give preference to Christians over and above people of other faiths. This kind of discrimination cannot go unchecked, and it was heartening to see the protests, both at the Women’s Marches the day after his inauguration, and the demonstrations against the immigration ban this weekend.

So what has this got to do with museums? How can and should museums respond to Trump in America – and, indeed, the rise of the far-right in Europe? I’m sure many of you have your own suggestions, but here’s my six-point plan:

And so, to return to where I started, to our new graduates, going out to form a new career in museums and galleries all over the world, I would say to them that they should be proud of, and celebrate, their achievements, and that through standing true to their values and using those values to guide their work, they can help museum to be places of strength and support, of joy and happiness. But also places of resistance and activism that stand up for that that is morally right. We, at the School of Museum Studies, will always support them in this endeavour.

Rob is the Learning Development Manager in the School of Museum Studies at the University of Leicester.

6 responses to “Donald Trump – Museums in the face of hate”