Posted by The University Leadership Team on February 28, 2017

Whenever I see an LGBT+ event advertised on campus I feel joy that attitudes have changed so dramatically and wonderfully over my lifetime.

February was LGBT History Month, and this year is significant because it marks 50 years since the partial decriminalisation of male homosexuality in England and Wales. Universities across the UK have been holding events looking back and celebrating what has been achieved and preparing for the challenges that still face us. Above all, these events provide an opportunity for people to demonstrate their commitment to diversity and a fair and just society for all.

LGBT History Month was established just over a decade ago, following the abolition of Section 28 of the Local Government Act 1988, which banned local authorities and teachers from ‘promoting’ homosexuality or publishing materials that ‘promoted’ its acceptance as a ‘pretended family relationship’.

The University of Leicester has a programme of wide-ranging events open to staff, students and the general public, and Leicester City Council is showing its support by flying the rainbow flag for inclusion and diversity at the town hall and other public buildings.

It is worth noting that in the not-so-distant past, this series of public lectures, research seminars and social events could well have been deemed illegal or, at best, distasteful.

Things have come a long way since I was a teenager, when I was convinced I was the only one with a different sexual identity, and that I had some sort of disease because, growing up, I hadn’t heard of any others like me. I grew up in a very ordinary suburb in a small Australian city, and I neither knew nor learned much about sex.

It was only when I got to university that it started to become clear to me that I was not alone, that there were many people out there with different sexual identities.

The change has been wonderful and amazing but, of course, the work is not finished. There are still LGBT+ people (especially transgender) living in fear and hiding. Young people still get bullied and worry about whether they are and will be OK. There are still people who think we should just shut up about it and don’t realise that it’s hard to shut up when a lot of what you see around you is still shouting out that only heterosexuality is really normal.

There’s a philosophical argument that we cannot learn from what has happened in the past because it is we in the present who construct our history. I would argue that, in practice, we in the LGBT+ community do have a lot to learn from our history and the activism and bravery that has got us this far.

Starting work as a lecturer in Australia in the early 1980s, I kept my sexual orientation to myself – although most people probably realised – and I was once denied a position because, I heard later, members of the panel preferred a “family man” and someone with whom they could “feel comfortable”.

Thirty years later I can not only “come out” as a homosexual provost of a leading UK university but can also, I believe, regard my sexual identity as an asset in my work. It has given me first hand experience of the way the mores and prejudices of a society can impact so negatively on the individual. It has given me a taste for justice and doing things properly, and compassion and sensitivity towards people dealing with bullying, harassment or marginalisation.

It is very important to say to younger people that change happens, that good arguments move people, change their minds and move their hearts. Straight people don’t think about gay people the way they used to. That is an incredible achievement for activism from “our side”, but straight people had to change themselves too. They had to do the work as well, in recognising the humanity and dignity of people who are different and understanding difference as valuable and enriching rather than threatening.

That is why it is so heartening to see so many diverse groups working together to make LGBT History Month a success, and opening up events to the wider community in Leicester. 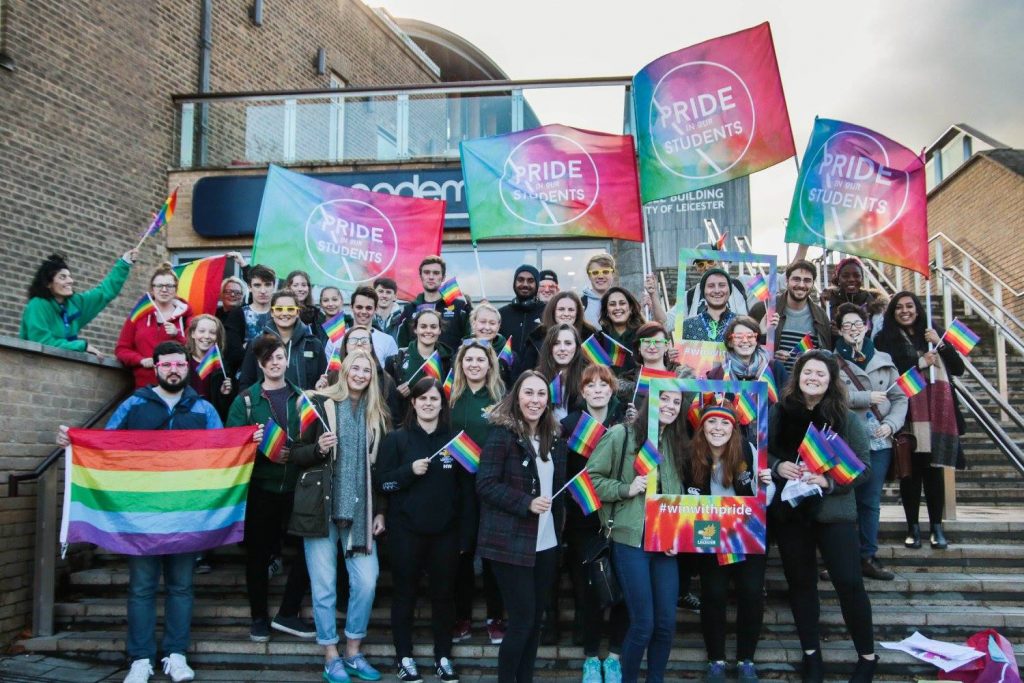 You have to embody the pride and embody the insistence that you are not going to take the lies and the misrepresentations. Good people listen and they respond and they change.

One of the things I am most proud of is that when I was younger, despite the insults and the fear about what taking a stand might mean, I was prepared to play a part in the activism that has created a world in which I am pretty sure the average teenager with a different sexual identity would no longer think they are the only one. There is always someone they can look to, someone who is confident in their skin, has someone who loves them and has a family that loves and respects them.

A lot of people in my generation didn’t have that at all. We had no one to show us what the end of the journey might look like.

What is different about the world now compared with 20 or 30 years ago is that there are more allies. Some people are legally required to help you, and not to stand by and watch bullying and harassment, but there are even more people who are morally driven not to stand by. That helps us call it out, shout it out. It strengthens our voice.

Big gains have been made and this is a time to look back at the past and celebrate them. It is also a time to reflect on what still lurks beneath the surface because there is still sometimes a gap between what people say and what they feel.

Here at Leicester, the university celebrates diversity and our leadership reflects that. But it is everyone’s business. Young people have just as much ability to influence others with their courage, their example and the power of their arguments.

The work is not yet done, and there are times it feels like it is being undone. You wonder why you have to say certain things again.

But change does happen when people decide to act and when they decide to really listen. It happens when people who are advantaged or “normal” understand the justice of the arguments being made by those who are disadvantaged or “abnormal”, and do something about it. I know, I have witnessed it.

This article originally appeared on the Times Higher Education website.

If you would like to comment on the ULT blogs, please visit our ULT forum on the staff Yammer pages.

Comments are closed, but trackbacks and pingbacks are open.