On This Day of War 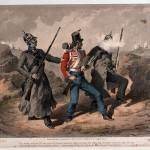 Daring Deeds of Valour By Dr Rachel Bates, University of Leicester The 29 January 2016 marks the 160th anniversary of the Victoria Cross, a key legacy of the Crimean War (1854-56). Over the past four years, I have been looking at how the Crimean War shaped British understanding of war, violence and nationhood. The creation […]

Witnesses, wives, politicians, soldiers: the women of Waterloo By Katherine Astbury Associate Professor and Reader of French at University of Warwick Visit The Last Stand: Napoleon’s 100 Days in 100 Objects: www.100days.eu The nature of warfare 200 years ago made the Battle of Waterloo a predominantly male affair. But, two centuries on, the history of […]

‘I deny the insane proposition that peace is more dangerous than war’: Commemorating Samuel Whitbread, 1758-1815 By E.J. Clery, University of Southampton In all the buzz surrounding the bicentenary of the defeat of Napoleon at Waterloo, no mention has been made of the existence of a peace movement in Britain during the long years of […]