Posted by Paul Brook in School of Business Blog: Distinctive and Relevant on November 19, 2014

In the age of much austerity and few alternatives, Paul Brook, Senior Lecturer in the Sociology of Work and Employment at the School, makes a renewed claim for a politics of labour mobilisation

Not long after Occupy Wall Street re-injected the idea of class (‘We are the 99%’) into America’s political consciousness, fast food workers are now demanding union rights as well as a living wage ($15 [£9.53] per hour). The Fight for 15 campaign, as it has become known on the blogosphere, directly opposes an optimistic vision of decent work to the abject reality of trying to survive on less than half that amount. McDonald’s, Burger King, Wendy’s, Pizza Hut, Dunkin’ Donuts and Taco Bell, no doubt unsurprisingly, are fundamentally opposed to the development. Those involved in the campaign know that they are in for a fight and it is one which they think they can, indeed must, win.

The movement has come about in no small part thanks to that fact that in the US (and the UK), since the economic crisis a staggering six out of ten new jobs created are low paid, principally in the retail and food service sectors. The reality for millions of people is that taking such a job has become the only option for survival. Such a rapid growth of jobs on poverty pay, coupled with the precariousness of part-time, irregular and insecure hours, is now so great that over a quarter of all US private sector jobs pay less than $10 (£6.40) per hour. These facts recently led the journalist Arun Gupta to argue we are currently witnessing a ‘Walmart effect’ within the economy, a situation where “jobs are traps” with “low wages, miserly benefits, stultifying work, no respect, and no future”. In the renewed absence of realistic economic alternatives, the Fight for 15 has taken its economic claims into the political arena.

Fast-food workers do not Mc-Love their wages

The movement started in late 2012 with 200 workers walking out of a few New York outlets. By the seventh national day of action, there were already walk-out strikes in 150 different cities involving tens of thousands of mainly African American and Hispanic workers. The actions included moments of spontaneous civil disobedience and sit-down in-chain occupations. Each strike day now makes international headlines and this May there was a global day of action with protests in 33 countries, including the UK. While the movement is funded by the 2 million strong Service Employees International Union (SEIU) its true strength comes from its network of workers, supporters and community-based campaigns which have allowed it to spread workplace-by-workplace, city-by-city, state-by-state and nation-by-nation. 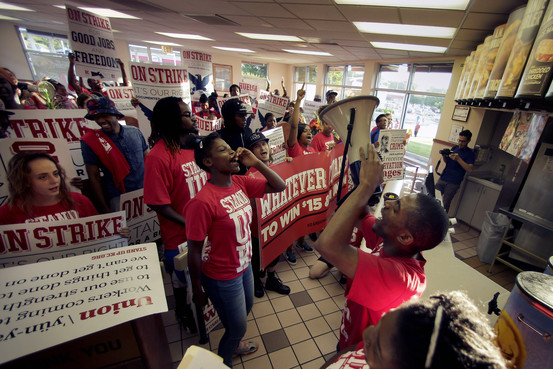 Protesting against Taco Bell in Kansas

There is a successful precedent for this strike-first, minority unionism strategy which the United Food and Commercial International Workers (UFCW) organisation have adopted in the Our Walmart campaign. The UFCW has also drawn inspiration from the legendary US union movement of the 1930s in which literally millions of workers were mobilised around the sit-down strike strategy. Nevertheless, many activists and supporters are uneasy about the degree of influence the unions’ leaders have within what is essentially a grassroots-led movement.

Broader political support has been expressed by President Barack Obama who is currently trying to push a minimum wage of $10.10 through the US Congress. The movement has not yet won an increase in the federal minimum wage but there have been a series of city-wide victories with Chicago, New York, San Francisco and Los Angeles proposing minimum wage rates of between $13 and $15 per hour.

Whatever its long term significance, the Fight for 15 movement puts paid to the recurrent argument that low paid, part-time service workers either cannot or will not resist their exploitation on account of their having too much to lose. This mobilisation is happening right now, in the United States, the nation supposedly most in thrall to the neo-liberal ideology of prioritising the preferences of the consumer above the needs of the worker. Time will tell whether this struggle reaches the critical level attained by the labour struggles of the 1930s. If it does, it will be down to the fact that the 99% have collectively refused to see endemic poverty and fear as their only possible future and fight, instead, for a more optimistic alternative.

Paul Brook is a senior lecturer in sociology of work and employment in the School of Management and an editor of Work, Employment and Society. He researches and publishes on emotional labour, medical labour, labour process theory and service work. He is currently researching early-career medics expectations and experience of working life in the UK's National Health Service (NHS).